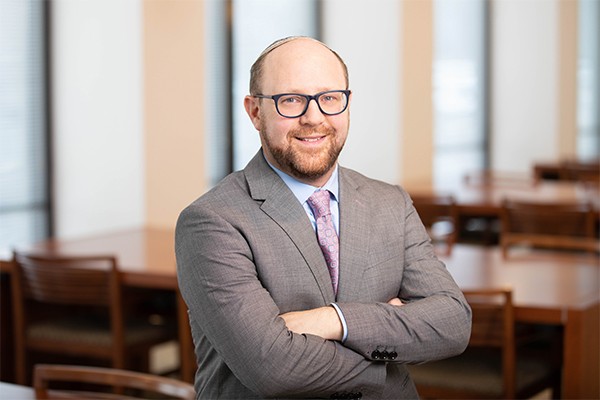 Villanova Law Professor and Chair in Jewish Law, Chaim Saiman, an expert on Jewish law, insurance law and private law, has been nominated and elected as a new member of the American Law Institute (ALI), the leading independent organization in the United States that produces scholarly work to clarify, modernize and improve the law.

The Institute’s mission is to “promote the clarification and simplification of the law and its better adaptation to social needs, to secure the better administration of justice, and to encourage and carry on scholarly and scientific legal work.” Being named a member is a prestigious designation, and Saiman now joins a group of distinguished individuals, including prominent judges, lawyers, and law professors, who bring perspectives, talent, wisdom and dedication from a variety of legal concentrations to the important work of the Institute.

“Chaim is an accomplished and preeminent legal scholar who is truly deserving of this honor,” said Mark C. Alexander, The Arthur J. Kania Dean of Charles Widger School of Law. “He holds the inaugural Chair in Jewish Law at Villanova, and his recent book was not only highly successful, but brought about thoughtful and insightful examination of Jewish law. I am proud to have him as a member of our faculty and I can’t wait to see what the future holds for Chaim.”

Saiman’s recent work with ALI has focused on the development of the Restatement of the Law of Liability Insurance (RLLI), and he has joined the next edition of Insurance Law and Policy casebook which draws on the approach developed in the RLLI. His latest scholarship looks at the contextualization of the RLLI and its critics within debates over the structure of insurance law more generally. He also plans to become involved with the Restatement of Consumer Contracts.

“It is certainly a huge honor to be elected to one of the most prestigious legal organizations in the country,” said Saiman. “Like many ideas based on elite and learned expertise, the law and its institutions are under considerable stress. The ALI's mission includes adaptation of the law to social needs, securing the better administration of justice, and encouraging scholarly and scientific legal work. I sense these goals have become increasingly controversial in our culture. If I can play a small part in rebuilding consensus around this mission, that would be a significant accomplishment.”

Saiman joined the Villanova Law faculty in 2006, and teaches Contracts, Insurance Law, Insurance Coverage Disputes, Jewish Law, and Legislation. In 2018, he published Halakhah: The Rabbinic Idea of Law, which explores how rabbis examined the Talmud and used it to frame philosophy and discussions in a legal way. Saiman was the Gruss Visiting Professor of Talmudic Law at both Harvard Law School and the University of Pennsylvania Law School, as well as a visiting fellow at Princeton University and a visiting professor at the University of Toronto, Bar-Ilan University and Hebrew University. Saiman has also served as a rabbinical court arbitrator (dayan) on the Beth Din of America, and as an expert witness in insurance law and Jewish law in federal court.

Prior to joining Villanova Law, Saiman was an Olin Fellow at Harvard Law School, a Golieb Fellow at NYU Law School, a law clerk to the Hon. Michael McConnell on the United States Court of Appeals for the Tenth Circuit, and he also worked as a corporate associate with Cleary Gottlieb in New York City.

Saiman received his BS from Georgia State University and his JD from Columbia University School of Law. He also studied at Yeshivat Har-Etzion (Gush) and Yeshivat Kerem B’Yavneh in Israel.