On the Path to Public Service 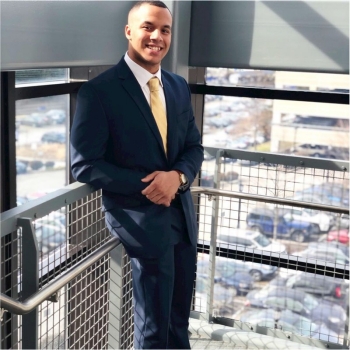 A passion for public service is what led Austin Skelton ’21 to pursue a law career, but community and values are what sold him on Villanova Law.

As an undergrad at Monmouth University, Skelton changed his major from Business Management to Political Science with a concentration in Legal Studies, and he never looked back. He was inspired to make the switch after becoming involved in the Black Lives Matter movement and attending the Justice for All march in Washington, DC. Skelton recalled thinking that protesting was not enough.

“I decided law school would provide me with the tools necessary to effectuate the change I wanted to see in this country,” Skelton said. “I want to use a career in law to advocate for those who have been silenced, harmed or disadvantaged by our country’s laws and systems.”

Once he began his studies at Villanova Law, Skelton knew he was in a place that would set him up for success. “Within the first weeks of law school, we were learning how to think like a lawyer,” he said. “After my first semester, I knew I had made the right choice with Villanova Law because I was using my mindset to succeed in my passion.”

Through Villanova Law, Skelton has been provided with two externship opportunities. The summer after his first year of law school, he was a legal intern for the New Jersey Office of the Attorney General. During the spring 2020 semester, he was a judicial extern under The Honorable Steven C. Tolliver in the Montgomery County Court of Common Pleas. Although this experience was cut short due to the COVID-19 pandemic, Skelton was able to learn valuable skills and network with other legal professionals, which he hopes will open doors for him with future opportunities.

“Villanova Law values success both inside and outside of the classroom,” Skelton added. In addition to his coursework, Skelton has taken advantage of the many opportunities Villanova Law has provided to him. He is a member of the National Trial Team, where he has competed against the nation’s best law student advocates in simulated jury trials. He is also the secretary of the Pro Bono Society, and was selected as the law student leader on a service trip for both Villanova law and undergraduate students to Tijuana, Mexico to work with migrants and complete asylum applications at the border. “This trip piqued my interest in immigration law and reminded me of my ‘why’ for attending law school.”

Overall, Skelton has found a community at Villanova Law that is guiding him on his path to public service. “At Villanova Law, everyone wants you to succeed. That starts all the way at the top with Dean Alexander, trickles throughout our administration and faculty, is exemplified by our students, and solidified by the staff in the law school building.”