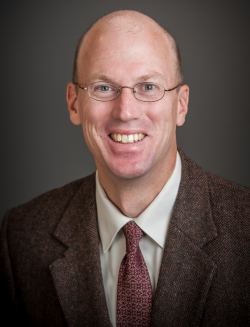 Todd Aagaard, Professor of Law, has been named a visiting fellow for the 2019-20 academic year at Resources for the Future (RFF), a nonpartisan environmental economics think tank based in Washington, DC. RFF’s mission is to improve environmental, energy and natural resource decisions through impartial economic research and policy engagement.

Aagaard, whose background is in environmental law, energy law and administrative law, has recently focused his research on the relationship between the energy sector and environmental protection. He plans to continue this focus during his time with RFF, whose Future of Power initiative promotes decarbonization of the power sector and the economy.

Aagaard’s role with RFF will primarily focus on research, where he hopes to collaborate with experts in the environmental and energy fields. “This year I’m working on a book about electricity capacity markets and an article about markets for renewable energy credits, both of which fit nicely with RFF’s mission,” said Aagaard.

In addition to publishing academic pieces, RFF also actively contributes to policy debates. Aagaard hopes to utilize his peers at RFF to gain a better understanding of the current environmental and energy issues being considered in Washington. “How we produce and use energy has vitally important consequences for the entire planet. The news about climate change and its impacts can be very discouraging,” Aagaard said. “Although the news is increasingly dire, there are pragmatic solutions being proposed and analyzed. Organizations such as RFF are doing exciting work, trying to figure out how can we make progress through steps that are feasible but that get the results we need.”

Aagaard received his BA with honors from Pomona College, his MS from the University of Michigan School of Natural Resources and the Environment and his JD magna cum laude from the University of Michigan Law School.  While at Michigan, he was the Editor-in-Chief of the Michigan Law Review and an Executive Editor of the Michigan Journal of Race & Law. Following completion of his JD and MS degrees, he clerked for Second Circuit Judge Guido Calabresi before joining the Environment and Natural Resources Division of the US Department of Justice as an attorney in the Appellate Section. At the Justice Department, he briefed and argued civil and criminal cases in federal courts of appeals in the areas of environmental law, natural resources law, Indian law and administrative law. Aagaard joined the Villanova Law faculty in 2008 and served as Vice Dean from 2015 to 2019.