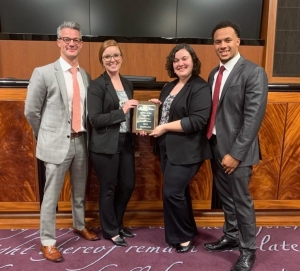 Levy and Skelton, along with other trial team members Mark Cerroni ’20 and Chelsea Eret ’21, competed against 16 of the top trial advocacy programs in the country on October 11-13.

The Battle of the Experts, a unique mock trial competition that showcased the critical role of expert witnesses in litigation, was judged by a jury of three leading trial lawyers from the Philadelphia area. The Villanova Law team tried a medical negligence case, in which they were tasked with direct and cross examining actual medical experts as part of the case presentation. They beat Southern Illinois University School of Law, Baylor University School of Law and Florida State University College of Law to advance to the semifinal round. There, they narrowly lost to Cumberland Law on a split 3-2 jury verdict. The team was coached by Steven Patton ’15 and Rebekah Lederer, both homicide prosecutors in the Philadelphia District Attorney’s Office.

Another Villanova Law Trial Team, consisting of Brittney Frederick ’20, Ashley Machamer ’20, Leah George ’21 and Ryan Kelly ’21, competed October 9-12 in the Mockingbird Challenge hosted by Faulkner University School of Law in Montgomery, AL. The Mockingbird Challenge is one of the premier fall semester mock trial competitions.  The annual competition brings elite teams together in a “challenge” style format. Villanova Law competed against 24 top trial trams from across the country in this invitation-only competition. The team was coached by Zachary Wynkoop, a prosecutor in the Philadelphia District Attorney’s Office, and David Santee ’95 CLAS, a criminal defense attorney in Philadelphia.

The National Trial Team is a student organization that focuses on oral advocacy at the trial level. The Trial Team represents Villanova at regional and national competitions hosted by other law schools and bar associations across the country. In these competitions, the Trial Team competes against the nation’s best law student advocates in simulated jury trials, which are scored by judges and seasoned attorneys.