On the Frontlines of Advocacy 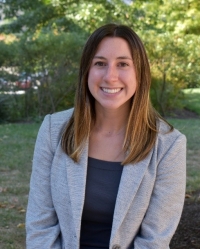 Juliana Clifton ’21 has always had a passion for environmental affairs, from earning her BA in Earth and Environmental Sciences to becoming a Staff Writer for the Villanova Environmental Law Journal.  Her dedication solidified at Villanova Law thanks to completing a summer 2019 externship with the Clean Air Council in Philadelphia, in which she was a witness to the nonprofit’s work in a crisis situation.

Clifton’s day-to-day work included engaging in many facets of the field, including litigation, legislative outreach and lobbying. She helped to file briefs, to draft legislation and observed city council meetings. She also collaborated with other departments in the Council, including transportation, communications and events. She had the opportunity to attend a Lobby Day in Harrisburg, PA to advocate for a funder’s bill, and she met one-on-one with state representatives. “It was a great opportunity to see people advocating for change and discussing the work they’re doing with officials,” said Clifton.

On the morning of June 21, 2019, a fire broke out at Philadelphia Energy Solutions, the largest refinery on the East Coast, resulting in multiple explosions and a shelter-in-place warning for the surrounding area. The fire burned for days after the explosions. Clifton recalls that day being very hectic at work; phones ringing constantly and concerned residents wanting to know the Council’s response to this issue.

In the days following the explosion, Clifton attended a public meeting with the Council. At the meeting, state senators discussed legislative issues surrounding the refinery explosion and answered questions from the public. Doctors from the University of Pennsylvania addressed health concerns and representatives from the Department of Environmental Protection discussed next steps in response to the refinery explosion.

During the disaster, Clifton had a front row seat to the Council’s response. “I had been learning about all these different cases related to environmental issues in Philadelphia. Then the refinery explodes, and it was the most tangible example of why we were doing what we were doing.”

Clifton admits that going into her externship with the Clean Air Council, she was not sure what to expect, since it is a different field from other legal environments. But after her summer, she recommends every law student take a chance to experience a nonprofit setting.

“Everyone I met in the nonprofit world is so incredibly passionate about what they do. It’s such a fascinating dynamic. It may not sound very glamorous, but it’s such a rewarding and interesting niche law profession.”