The Irony of Modern Catholic History, 11/4 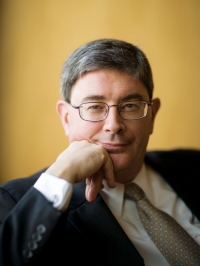 The McCullen Center welcomes George Weigel, Distinguished Senior Fellow and William E. Simon Chair in Catholic Studies of the Ethics & Public Policy Center to discuss his new book, The Irony of Modern Catholic History: How the Church Rediscovered Itself and Challenged the Modern World to Reform. An account of two centuries of profound change in the Catholic Church and the world, the book reveals how Catholicism offers 21st Century essential truths for society’s survival and flourishing.

Weigel is a Catholic theologian and one of America’s leading public intellectuals. He is the author of more than 20 books, and is perhaps best known for his widely translated and internationally acclaimed two-volume biography of Pope St. John Paul II, The New York Times bestseller, Witness to Hope (1999), and its sequel, The End and the Beginning (2010). In 2017, Weigel published a memoir of the experiences that led to his papal biography, Lessons in Hope — My Unexpected Life with St. John Paul II. His essays, op-ed columns and reviews appear regularly in major opinion journals and newspapers across the United States. A frequent guest on television and radio, he is also Senior Vatican Analyst for NBC News. His weekly column, “The Catholic Difference,” is syndicated to 85 newspapers and magazines in seven countries.

The lecture is approved by the Pennsylvania Continuing Legal Education Board for 1 substantive CLE credit.