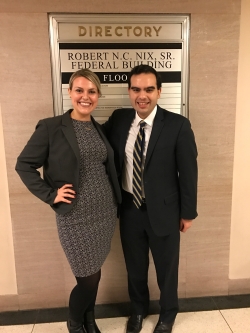 Under the supervision of a full-time faculty member, CARES students represent refugees who have fled human rights abuses in their home countries to seek asylum in the United States. After completing a semester in the CARES clinic, Buchowiec and Firouzi chose to continue their studies through the Advanced Advocacy Clinic.

“This is the second time I have won asylum for a client in immigration court as a CARES student,” explained Buchowiec. “I enjoyed my first clinic experience so much that I decided to take Advanced Clinic. The clinic is a space where you get to put everything you learned in law school to the test. It offers the practical experience that you cannot get from a class.”

Firouzi and Buchowiec represented a young mother of U.S. citizen-children who fled constant turmoil, trauma and violence in her home country. The case originally came to CARES in 2015, but was delayed several times due in part to the client’s discomfort in discussing the specifics of her experiences.

They spent hundreds of hours preparing for the case, piecing together evidence that was key to making a compelling claim for asylum. Buchowiec and Firouzi located expert witnesses, facilitated a psychological evaluation, interviewed their client and composed her affidavit, wrote a brief and organized mock direct examination.

All of their hard work paid off. The immigration judge unequivocally granted their client humanitarian asylum, citing severe past persecution based on the overwhelming evidence presented. Opposing counsel waived its right to appeal.

For Firouzi, who plans to pursue a career in public interest, his success with Buchowiec fortified his choice.

“To be able to see the palpable sense of relief in our client's face and demeanor after her asylum grant was as strong a reaffirmation of that desire as ever,” Firouzi said.

“There are scores of individuals out there like her who need tenacious advocates on their behalf so that justice can be facilitated. Without legal representation for people like her, they face much more precarious paths to full justice and equality.”