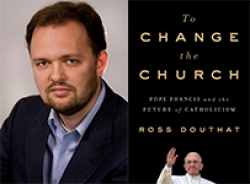 "Pope Francis and the Future of Catholicism"

Ross Douthat is an opinion columnist for The New York Times, covering politics, religion, moral values and higher education. He joined The New York Times in 2009 as an Op-Ed columnist. Previously, he was a senior editor at The Atlantic and a blogger for theatlantic.com.

Douthat is also the author of Bad Religion: How We Became a Nation of Heretics (2012), and Privilege: Harvard and Education of the Ruling Class (2005), and a co-author of Grand New Party: How Republicans Can Win the Working Class and Save the American Dream (2008). He is also the film critic for National Review.

**The event is free and open to the public.

The annual Catholic Social Thought and Law Symposium is named for Joseph T. McCullen Jr., in recognition of his generous support of Villanova University Charles Widger School of Law.