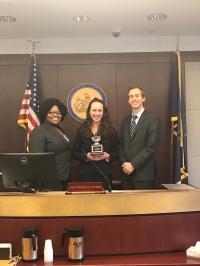 Members of Villanova Law's National Trial Team—Alexa Arndt ’18, Samuel Cooper ’19 and Samantha Fitzpatrick ’19—recently advanced to the final round of the National Trial Competition Regional Tournament in Philadelphia. Since 1975, the Tournament has served to encourage and strengthen students' advocacy skills through quality competition and valuable interaction with members of the bench and bar. It is considered the premier trial advocacy tournament in the country.

LaVelle King ’18, John Morgan ’19 and Scott Zlotnick ’19 also competed in the tournament and finished with a winning record.

In the final round, Villanova competed against a team from Temple Law, which ultimately won on a 4-3 decision. Our team advanced from a field of 26 law school teams to be one of four teams who were named finalists. Other participating schools included the University of Pittsburgh, Seton Hall, Rutgers, Penn State Law, Dickinson, Drexel, Temple, Widener, Duquesne and the University of Pennsylvania.

The tournament is sponsored by the American College of Trial Lawyers. Each round is judged by a panel of active judges and accomplished trial lawyers from the Philadelphia region. The team was coached by Brian McBeth ’15, Steven Patton ’15 and Zach Wynkoop.