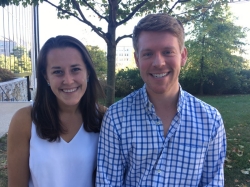 Patrick McGinnis ’18 and Dana Sleeper ’18 impacted the lives of individual clients as students in Villanova’s Farmworker Legal Aid Clinic (FLAC). Now their work as researchers may influence public policy, helping to illuminate discrepancies in the availability of interpretation assistance in select Pennsylvania courts.

Under the supervision of FLAC Director Caitlin Barry, McGinnis and Sleeper contributed to “Unfinished Business: The Continuing Challenge for Limited English Proficient Individuals in Pennsylvania’s Minor Courts,” a recent report by the Sheller Center for Social Justice at Temple Law School and Villanova Law. The study examined whether non-English speakers receive interpretation assistance during their hearings in select Pennsylvania courts. Federal and state laws require the use of interpreters at Pennsylvania criminal, civil and administrative hearings for parties or witnesses with limited English proficiency.

“Participating in this type of research was an exciting way to break away from the standard law school classroom environment and to work on a project that has the potential to impact and influence the lives of real people,” McGinnis said. “Conducting observations and collecting data was very meaningful to the Language Access Project working group who we were working for, and it is rewarding to know that our efforts might ultimately have a positive impact on individuals in our local communities.”

The research team observed nineteen Magisterial District Judge courts in Montgomery, Delaware and Chester counties. The study found that the majority of observed courts failed to provide certified interpreters for civil hearings. Additionally, courts failed to consistently provide interpreters at the front desk for limited English proficient individuals and failed to provide notice of the right to language services. The research also found that individuals with limited English proficiency have unequal opportunities to access and participate in court matters depending on their geographic location in the state.

“Hopefully this report will bring more awareness to the problems associated with language access in the Magisterial District Judge courts across the state of Pennsylvania,” Sleeper said. “Our research highlighted the severity of the inconsistencies across a small percentage of courts, which will likely serve as a wake-up call to state officials capable of making changes on a larger scale.”

The completion of this study comes just months after the Pennsylvania Supreme Court released its comprehensive statewide language access plan in March 2017. Using the state’s language access plan as guidance, the “Unfinished Business” report sets forth several recommendations for increasing compliance by the Magisterial District courts with the law by training court staff and judges; standardizing language services procedures; and providing greater oversight and enforcement by the Supreme Court and the Administrative Office of Pennsylvania Courts.