Ethics, Integrity and Civility (or the lack thereof) in Media 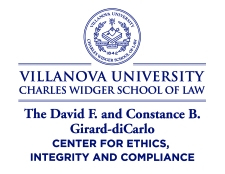 Hosted by The David F. and Constance B. Girard-diCarlo Center for Ethics, Integrity and Compliance

Debates over the role and ethics of traditional and new media in politics, law and society have reached a fever pitch. The David F. and Constance B. Girard-diCarlo Center for Ethics, Integrity and Compliance brought together three experienced media professionals to examine the issues facing today’s press and to share their views on how members of the public can make sense of media in 2017.

The event took place on Wednesday, October 18 from 12-1:30 p.m. in the Laurence E. Hirsch ’71 Classroom (Room 101) at Villanova University Charles Widger School of Law. The event was free and open to the Villanova community and the public.