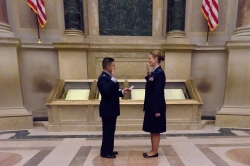 Backed with a Villanova Law degree, our graduates find creative ways to use their legal expertise to serve and make an impact. For alumna Beth Hernandez ’04 joining the U.S. Army JAG Corps upon graduation opened the door to a varied legal career and distinguished service.

“Along the way I’ve had have some amazing assignments. I’ve worked as a civil law attorney, a prosecutor and a defense counsel,” she remarked. “Most recently, I completed a Legislative Fellowship, where I served on the personal staff of a member of Congress for one year.”

Following three years of service in the Army, Hernandez completed an inter-service transfer to the U.S. Air Force JAG Corps. She continues to serve with the Air Force JAG Corps and was promoted to the rank of Lieutenant Colonel in January 2017.

Hernandez is currently assigned to the Secretary of the Air Force’s Legislative Liaison office, where she serves as a liaison between the Air Force and Congress. This summer, she will become the Staff Judge Advocate at Grand Forks Air Force Base in North Dakota, overseeing base legal operations and providing counsel to commanders.

Hernandez credits her Villanova Law education, specifically her experience in a sentencing workshop, for sparking her legal interests.

“When I entered law school, I had no idea what type of law I wanted to practice. It was through the classes at Villanova Law, particularly Professor Steve Chanenson’s Sentencing Workshop, that I learned I loved criminal law.”

She continued, “In his course, we would read about various offenses and advocated for what we believed a proper sentence should be. For the first time, I became truly passionate about an area of the law – I would argue my position and listen to others as they argued theirs.  It was then that I knew I wanted to practice criminal law.”

Beyond her academics, Hernandez believes other aspects of her Villanova experience contributed to her continued professional success.

“The relationships I formed while at Villanova Law are the reason that I am successful today.  Throughout all these years, I have kept in touch with Prof. Chanenson, who has provided incredible mentorship and support,” Hernandez said. “It is an honor to be a part of the world’s greatest military, and I have Villanova Law to thank for helping to make that a reality.”

As for advice for students hoping to follow a similar path, Hernandez said hard work and an open mind are key.

She continued, “My advice is to work hard, find subjects about which you are passionate, set professional goals, and keep an open mind. New opportunities may arise that are outside of what you had pictured for yourself, and if you are prepared, you can recognize them and take action.”