Judge Joseph A. Greenaway Jr. of the United States Court of Appeals for the Third Circuit to deliver Villanova University Charles Widger School of Law’s 2018 Commencement Address, May 18 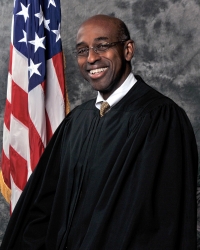 Villanova, Pa. – Mark C. Alexander, Arthur J. Kania Dean of Villanova University Charles Widger School of Law, announced that Judge Joseph A. Greenaway of the United States Court of Appeals for the Third Circuit will address the Class of 2018 as the School’s commencement speaker and will also receive the Villanova Law Medallion Award in recognition of his achievements. Commencement will be held at 10:30 a.m. on Friday, May 18, 2018, on The Campus Green on the campus of Villanova University.

Joseph A. Greenaway Jr. received his commission from President Obama as the sixty-second jurist appointed to the United States Court of Appeals for the Third Circuit on February 12, 2010. Judge Greenaway was sworn in on February 24, 2010, and sits in Newark, New Jersey. He earned his BA in History from Columbia College in 1978 and graduated from Harvard Law School in 1981.

Judge Greenaway’s legal career began as a litigation associate with the New York law firm of Kramer, Levin, Nessen, Kamin and Frankel. After a clerkship with the late Hon. Vincent L. Broderick of the U.S. District Court for the Southern District of New York, he returned to the Kramer, Levin firm for two years. In 1985, Judge Greenaway joined the United States Attorney’s Office for the District of New Jersey, where he was subsequently promoted to Chief of the Narcotics Bureau. He prosecuted the government’s case against Wayne Pray, a.k.a.  “Akbar,” which resulted in Akbar being sentenced to life in prison without the possibility of parole. Prior to his appointment to the federal bench, he served as in-house counsel for Johnson & Johnson. On July 26, 1996, at the age of thirty-eight, Judge Greenaway received his commission from President Clinton as the sixty-seventh jurist appointed to the federal bench in New Jersey. He was sworn in as a federal judge on September 20, 1996.

A frequent invited speaker, Judge Greenaway delivered the Class Day address at Columbia College’s commencement in 1998; the commencement address at Cardozo School of Law in 2006; and Rutgers Law School’s Weintraub Lecture in 1998, which was subsequently published in Rutgers Law Review. His work has also been published in leading journals, including Litigation, Columbia Journal of Race and Law and Cardozo Law Review.

About Villanova University Charles Widger School of Law: Founded in 1953, the Villanova University Charles Widger School of Law provides broad-based legal education that is grounded in academic rigor, practical hands-on training and a foundation in business that prepares graduates for diverse and rewarding legal careers. The Law School, which is accredited by the American Bar Association, offers six in-house clinics and more than 150 externship opportunities that immerse students in the real-world application of their legal skills. Villanova is home to Centers of Excellence—the Eleanor H. McCullen Center for Law, Religion and Public Policy; the David F. and Constance B. Girard-diCarlo Center for Ethics, Integrity and Compliance; the John F. Scarpa Center for Law and Entrepreneurship; and the Jeffrey S. Moorad Center for the Study of Sports Law—which provide students the opportunity to pursue innovative, interdisciplinary legal fields through study, practical experience and mentorship.