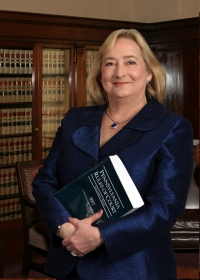 Villanova, Pa. – Mark C. Alexander, Arthur J. Kania Dean of Villanova University Charles Widger School of Law, announced that Justice Debra Todd of the Pennsylvania Supreme Court will address the Class of 2017 as the School’s commencement speaker and will also receive the Villanova Law Medallion Award in recognition of her achievements. Commencement will be held at 10:30 a.m. on Friday, May 19, 2017, in The Pavilion on the campus of Villanova University.

Justice Debra Todd was elected to the Pennsylvania Supreme Court in 2007, following eight years on the Superior Court. Prior to serving on the bench, she was a trial attorney in Pittsburgh for 18 years, first as an in-house litigator for U.S. Steel, and later in private practice with an emphasis in civil litigation.

Justice Todd received her Bachelor’s degree with Honors from Chatham College, a Juris Doctor from The University of Pittsburgh (Law Review); and an LLM in the Judicial Process from the University of Virginia.

She is an elected member of the American Law Institute and the Academy of Trial Lawyers of Allegheny County, and a Fellow of the Allegheny County and PA Bar Foundations. She is a frequent lecturer and panelist for CLE programs on appellate practice, ethics, elder justice, child abuse and veterans’ issues.

Her awards include an Honorary Doctorate in Public Service from Chatham University; the Philip Werner Amram Award; the Pitt Law Distinguished Alumni Award; and the Amen Corner's Judge Robert E. Dauer Award for Judicial Leadership and Excellence.  In 2016, Pittsburgh Action Against Rape awarded Justice Todd its first Visionary Award, recognizing her significant impact in the lives of survivors of sexual violence. Most recently, she received the Women's Bar Association of Western Pennsylvania’s Susan B. Anthony Award, for promoting equality in the legal profession.