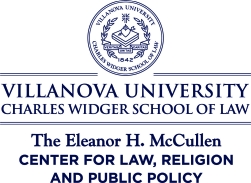 Villanova, Pa. – Villanova University Charles Widger School of Law announced today that its Center for Law, Religion and Public Policy will be named in honor of Eleanor H. McCullen, recognizing recent gifts totaling $5 million from her husband, Joseph T. McCullen Jr. ’57 CLAS. The Eleanor H. McCullen Center for Law, Religion and Public Policy will offer new academic programming for Villanova law students and will serve as a hub for conferences and seminars on emerging advocacy issues in law, religion and public policy. Mr. McCullen has supported the University and the Law School for many years, including the establishment in 2007 of The Joseph T. McCullen Jr. Symposium on Catholic Social Thought and Law.

“The founders of our nation enshrined in the Constitution the American people’s right to freedom of religion. More than 225 years later, we continue to explore and debate the scope of this fundamental right,” remarked Mark C. Alexander, Arthur J. Kania Dean of the Villanova University Charles Widger School of Law. “As a Constitutional Law professor, I know the importance of civil discourse that includes all voices and I am so proud that Villanova Law will be home to a center dedicated to such vital work. On behalf of the Law School, I am deeply grateful to Joe and Eleanor for their generosity and for their commitment to such a noble cause.”

“America counts among its earliest settlers immigrants who fled their homelands due to religious persecution. Though the Constitution preserved religious freedom among our fundamental rights, people of all faiths are continually called upon to defend this right,” said Mr. McCullen. “Eleanor and I hope that this Center will serve as a constant reminder of the importance of this freedom and that it becomes a beacon for all who fight against religious injustice.”

Mr. McCullen continued, “It is fitting that Villanova, a Catholic and Augustinian university, has inaugurated the Center for Law, Religion and Public Policy, and that my gift to the Center recognizes Eleanor’s outstanding work in these fields.”

New academic programming will be introduced under the auspices of the Eleanor H. McCullen Center for Law, Religion and Public Policy, including innovative coursework, a visiting scholars program, and conferences and seminars on emerging issues in these fields. The Center will serve as a resource for the entire University community and will sponsor interdisciplinary research and collaboration. Additionally, future initiatives will include an adoption clinic and a concentration program in law and religion.

The gift is part of the University’s Comprehensive Capital Campaign, “For the Greater Great: The Villanova Campaign to Ignite Change.” The most ambitious in the University’s 175-year history, the Campaign to Ignite Change is aimed at cultivating academic innovation across its schools and colleges, investing in recruiting and retaining the finest teacher-scholars, dramatically enhancing financial aid and student opportunities, and continuing to build a premier living-learning environment on the University’s 260-acre campus. Since the campaign launched in October 2013, more than $620 million has been raised—with nearly $64 million in gifts and pledges allocated to the Villanova University Charles Widger School of Law.

“The McCullens’ continued philanthropic support of Villanova University and Villanova Law is an inspiration to the entire University community,” said Michael J. O’Neill, Villanova’s Senior Vice President for University Advancement. “This gift, which names the Center for Law and Religion at the Law School, is a testament to their dedication and commitment to the University’s mission.”

The Eleanor H. McCullen Center for Law, Religion and Public Policy builds upon and complements the Law School’s three existing centers:  the Jeffrey S. Moorad Center for the Study of Sports Law; the David F. and Constance B. Girard-diCarlo Center for Ethics, Integrity and Compliance; and the John F. Scarpa Center for Law and Entrepreneurship.

About Joseph and Eleanor McCullen

Joseph McCullen is the Chairman of McCullen Capital, LLC (MCAP), a Boston-based family office formed in 2000 to manage and invest the assets of the McCullen family.  MCAP also provides administrative support to the McCullen family’s 501(c)(3) charitable foundation known as the Flame of Love Foundation, which was established to provide assistance to distressed and poor individuals.

Mr. McCullen’s business career includes 25 highly successful years as an early-stage venture capitalist, focusing on high technology companies. Mr. McCullen was a board member and the founding investor in numerous private companies, several of which attained valuations in excess of a billion dollars upon sale or IPO. He served as a Managing Director of J.H. Whitney & Co. and OneLiberty Ventures (now called Flagship Ventures).

Mr. McCullen devoted 12 years to government service, four of them in the military as a young man, and later as a Special Assistant to the President of the United States (1971-1973). He went on to serve as Assistant Secretary of the Navy and Acting Secretary of the Navy (1973-1977).  Mr. McCullen also was an Associate Director of Ronald Reagan’s Presidential Transition Team. During his service to the country, he was the recipient of two Distinguished Public Service Medals. He earned his Bachelor of Arts degree from Villanova University in 1957 and received an honorary doctorate degree from his alma mater in 1976.  .

The McCullens, particularly Eleanor, have a long history of supporting legal issues related to religious freedom. Mrs. McCullen, a lifelong Catholic and pro-life activist, was lead plaintiff in the U.S. Supreme Court case McCullen v. Coakley. In that case, which was adjudicated in June 2014, the Supreme Court made a unanimous decision that struck down a Massachusetts abortion clinic buffer zone statute on First Amendment grounds.

Mrs. McCullen is a lay Franciscan who previously was the Vice Minister of the Franciscan Monastery in Kennebunkport, Maine. She has devoted much of her life to counseling pregnant women considering abortions; she has provided spiritual guidance, financial assistance, food, material items and has helped secure employment for mothers and fathers. In addition, Mrs. McCullen counsels prisoners at the Massachusetts Correctional Institution in Norfolk, Massachusetts. With her encouragement, several inmates have received college degrees, authored books and produced poetry and works of art. She has assisted former prisoners when they returned to society.

Frequently featured on the national public speaker circuit, Mrs. McCullen has been profiled in publications such as The Washington Post, The New York Times, The Wall Street Journal and National Review. She has studied at St. Joseph’s University in Pennsylvania and received an honorary PhD of Humane Letters from Holy Apostles College in Connecticut.

About Villanova University Charles Widger School of Law: Founded in 1953, Villanova University Charles Widger School of Law provides broad-based legal education that is grounded in academic rigor, practical hands-on training and a foundation in business that prepares graduates for diverse and rewarding legal careers. The Law School, which is accredited by the American Bar Association, offers six in-house clinics and more than 150 externship opportunities that immerse students in the real-world application of their legal skills. Villanova is home to Centers of Excellence—the Eleanor H. McCullen Center for Law and Religion; the David F. and Constance B. Girard-diCarlo Center for Ethics, Integrity and Compliance; the John F. Scarpa Center for Law and Entrepreneurship; and the Jeffrey S. Moorad Center for the Study of Sports Law—which provide students the opportunity to pursue innovative, interdisciplinary legal fields through study, practical experience and mentorship.