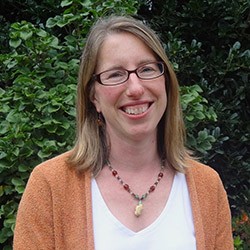 Lisa Sewell, PhD, professor of English, is the Luckow Family Endowed Chair in English Literature in Villanova’s College of Liberal Arts and Sciences. She earned a bachelor’s from UC Berkley, an MFA from New York University and her PhD in English and American Literature from Tufts University. Dr. Sewell is an accomplished author and poet and teaches courses in creative writing and contemporary American literature at Villanova, with a focus on environmental writing, feminist and gender theory, poetry, ecopoetics and twentieth century poetry movements.

Her poems have been widely published in literary journals including Ploughshares, Prairie Schooner, Drunken Boat, Paris Review, Crab Orchard Review, Salamander and more. She has co-edited several collections of essays for Wesleyan University Press including American Poets in the 21st Century: The New Poetics (2007), and most recently, North American Women Poets in the 21st Century: Beyond Lyric and Language (Wesleyan 2020). She has contributed chapters to several collections that focus on 20th and 21st century North American poetry—including A History of Twentieth Century Women's Poetry (Cambridge 2016).

Her most recent book of poetry, Impossible Object, won the 2014 Tenth Gate Prize from The Word Works, and she has been invited to read her work at prestigious institutions across the country including, Barnard College, Kelly Writers House at the University of Pennsylvania, Fordham University, CalPoly San Luis Obispo, University of the Pacific and Connecticut State University.

Dr. Sewell has received grants and awards from the Leeway Foundation, The National Endowment for the Arts, the Pennsylvania Council on the Arts and the Fine Arts Work Center at Provincetown, and she has held residencies at the Virginia Center for the Creative Arts, the MacDowell Colony, Yaddo, Fundacion Valparaiso and The Tyrone Guthrie Center.

About the Luckow Family Endowed Chair in English

Through their personal interest and The Luckow Family Foundation, Robert W. and Audrey Luckow have distinguished themselves as philanthropists who have generously supported a variety of worthy causes. In addition to providing critical resources to Villanova through endowing the Chair in English and supporting the University's Annual Fund, their gifts have touched the lives of many in significant ways, from ensuring access to top-quality health care to providing spiritual, recreational and educational opportunities for children in need. In particular, they established the Luckow Family Challenge with their daughter, Stefanie ’06 CLAS, a matching gift program that has supported more than 40 endowed scholarships across the University.

Beyond their kind financial support, Mr. and Mrs. Luckow have contributed to the vitality of the University through their former service on the Parents Executive Committee, the lead parent volunteer group within University Advancement's Parent Program, which works with Villanova's Office of Student Life, Career Center and Enrollment Management to create strategies to reach more parents and involve them more closely in the life of the University. Through the establishment of The Luckow Family Endowed Chair in English and The Luckow Family Endowed Fund for Scholarships in Education, the Luckow family has bolstered the innovative, mission-driven programs that serve to define the Villanova experience, distinguish the College and the University and provide students with a solid foundation of Augustinian values and knowledge.