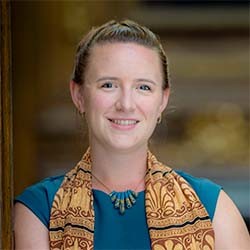 Eliza Gettel, PhD, is a historian of the ancient Mediterranean, especially the ancient Greek and Roman worlds. She is currently writing a book about how the many koina (often translated as federal states) of the Greek mainland survived and transformed after the region became a Roman province. Her current research therefore engages with questions about federalism, institutions and scales of community within empire.

Previously, she has published on Greek federal coins, displaced persons in the Hellenistic Mediterranean and connections between the fields of classics and early anthropology. She has a deep interest in the material remains of the past. She has worked on archaeological excavations in Jordan, Greece and Turkey, and she has research specialties in Greek epigraphy (inscriptions) and numismatics (coins). She is invested in ancient historical pedagogy: she currently serves as co-chair of the Committee on Teaching for the Association of Ancient Historians.

Each semester, she teaches a core history course on citizenship in the Greco-Roman world. Common elective and graduate course offerings also include surveys of ancient Greek and Roman history, as well as thematic courses about empire and ancient medicine.

About the Albert R. Lepage Endowed Professorship in History

Albert Lepage is the retired co-chairman of Lepage Bakeries, Inc., a 113-year-old maker of breads, rolls, English muffins and donuts. Lepage joined the family business in 1971 and served as co-owner from 1978 and chairman from 1983 to 2012, when the company merged with Flowers Foods. He also served as chairman of the Quality Bakers of America Co-operative and treasurer of the American Bakers Association.

Throughout his career and continuing in his retirement, Lepage has been an active volunteer and philanthropist, serving on the boards of St. Mary’s Health System, Hebron Academy in Hebron, Maine, the Portland Symphony Orchestra, the Lewiston-Auburn Arts, the Maine Arts Commission and the Maine Governor’s Business Council.

Lepage graduated from Villanova University’s College of Liberal Arts and Sciences in 1969.