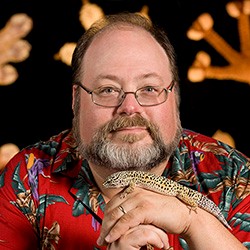 Aaron Bauer, PhD, professor of Biology, is the first recipient of the Gerald M. Lemole, MD, Endowed Chair in Integrative Biology. Dr. Bauer is a world-renowned herpetologist whose research concentrates on the morphology and systematics of geckos and other lizards. Dr. Bauer received a BS in Zoology and BA in History (Honors) from Michigan State University and a PhD in Zoology from the University of California, Berkeley.

Dr. Bauer’s research focuses on systematics, or the study of biodiversity. Dr. Bauer regularly travels around the world to study geckos, how they adapt to their environments and how they respond to threats such as climate change. Dr. Bauer regularly involves Villanova students—both graduate and undergraduate—in his research, and many of his papers are co-authored by his students.

Dr. Bauer has published over 700 manuscripts in prestigious journals such as Science, Proceedings of the Royal Society and Journal of Biogeography and has contributed chapters to dozens of scholarly books. His paper on leaf-toed geckos and their biogeography was selected as 2014 paper of the year in the international journal Systematics and Biodiversity. He has also published five books, including Geckos: The Animal Answer Guide (Johns Hopkins University Press, 2013) and The Amphibians and Reptiles of Alberta (University of Calgary Press, 1994 – second edition 2000), which won the Alberta Scholarly Book of the Year Award and the Emerald Award for Environmental Excellence. He contributed to the highly acclaimed book The Curious Mr. Catesby (University of Georgia Press, 2015) a study of America’s first naturalist and is editor of the book series The Emergence of Natural History published by E.J. Brill.

Dr. Bauer received the Villanova Outstanding Faculty Research Award in 2002 and the Graduate Alumni Founder’s Award in 2008. He has been the principal investigator or co-principal investigator on nine successful National Science Foundation research grants and served as President of the Herpetologists’ League and of the Society for the Study of Amphibians and Reptiles, Chairman of the Herpetological Association of Africa, and Secretary General of the World Congress of Herpetology.

In addition to providing critical resources to enhance science education at Villanova, the Endowed Chair also will serve as a lasting tribute to the special relationship shared by Villanova and Dr. Lemole.

A 1958 graduate of the College of Liberal Arts and Sciences, Dr. Lemole became a pioneer in the field of cardiac thoracic medicine. A highly esteemed surgeon and author, he has taught and practiced medicine around the world. He also has established himself as a generous philanthropist who has lent his support to numerous Christian and educational causes. At Villanova, Dr. Lemole’s friendship and support has included the endowment of the Rev. Angus N. Carney Endowed University Scholarship, which has benefited several students since its establishment in 1999.