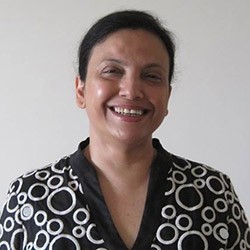 Raka Shome, PhD, is the The Harron Family Endowed Chair, and Professor of Communication. She writes on postcolonial cultures, transnational feminism and nationalism as they intersect with media/communication cultures. Her writings are informed by theoretical orientations in cultural studies, postcolonial studies and transnational feminism. Her current research interests are in Asian (and non-western) Modernities, Contemporary Indian (Hindu) Nationalism and Gender; the Global South; Transnational Politics of Knowledge Production as a Communication issue.

She is the author of Diana and Beyond: White Femininity, National Identity, and Contemporary Media Culture (University of Illinois Press, 2014)—a book that adopts a transnational feminist approach to examine how new sets of postcolonial relations in contemporary North Atlantic Western cultures are mediated through bodies of white femininity while also being linked to erasures of women from the Global South. The book has been reviewed in many outlets such as but not only Times Literary Supplement; Journal of Communication, New Formations, European Journal of Cultural Studies, and she was interviewed on a radio show of Australian Broadcasting Corporation about this book. Dr. Shome is currently writing a book on the Clean India Movement and Contemporary Hindu Nationalism.

About the Harron Family Endowed Chair in Communication

The Harron Family Endowed Chair in Communication honors the Harron family's accomplishments in the field of communication, their philanthropic legacy and the Department's commitment to excellence in communication education, scholarship and practice.