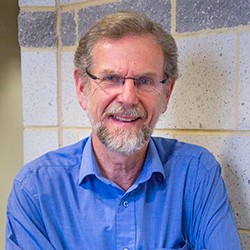 William Desmond, PhD, is the David R. Cook Chair in Philosophy, and his work is primarily in metaphysics, ethics, aesthetics and the philosophy of religion. He received his BA in Philosophy and English and an MA in Philosophy from the University College Cork, National University of Ireland. He went on to earn a PhD from Pennsylvania State University.

Dr. Desmond is the author of many books, including the trilogy Being and the Between (1995), Ethics and the Between (2001) and God and the Between (2008). Being and the Between won both the Prix Cardinal Mercier Award and the J.N. Findlay Award for best book in metaphysics. His other books include Art and the Absolute (1986), Desire Dialectic and Otherness: An Essay on Origins (1987), Philosophy and Its Others: Ways of Being and Mind (1990), Beyond Hegel and Dialectic (1992), Perplexity and Ultimacy (1995), Hegel’s God (2003), Art, Origins, Otherness: Between Art and Philosophy (2003) and Is There a Sabbath for Thought?: Between Religion and Philosophy (2005). Dr. Desmond has also edited five books and published more than 100 articles and book chapters. His book, The Intimate Universal: The Hidden Porosity among Religion, Art, Philosophy and Politics,Columbia University Press (2016), received the J.N. Findlay Prize for best book in Metaphysics, 2016-2017. More recently he has published The Gift of Beauty and the Passion of Being: On the Threshold of the Aesthetic and the Religious (2018) and The Voiding of Being: The Doing and Undoing of Metaphysics in Modernity (2020).

About the David R. Cook Endowed Chair of Philosophy

Inaugurated in March 1993, the David R. Cook Endowed Chair in Philosophy in the Villanova University College of Liberal Arts and Sciences aims to enrich the intellectual life of students and preserve the University as a leader in Catholic higher education. The chair serves as a role model and mentor to students, encouraging them to become critical thinkers who are proactive in their communities.

The David R. Cook Chair in Philosophy distinguishes an outstanding scholar in Philosophy and establishes an environment conducive to meaningful teaching and scholarly research. Research produced by the chair serves the Villanova community by enhancing students’ educational experiences and strengthening the national reputation of the University.