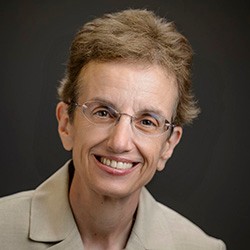 Ilia Delio, OSF, PhD, is a Franciscan Sister of Washington, D.C., and holds the Josephine C. Connelly Endowed Chair in Theology at Villanova University. A native of Newark, NJ, she earned a PhD in pharmacology from Rutgers University-School of Healthcare and Biomedical Sciences and a PhD in theology from Fordham University. Sister Delio’s research focuses on the intersection of science and religion. She addresses topics such as theology and evolution, technology and human becoming; and a renewed understanding of catholicity in a world of complexity.

Sister Delio is the author of 22 books, including The Unbearable Wholeness of Being, which won the 2014 Silver Nautilus Award and a Catholic Press Association Book Award. Her other books include Care for Creation (Catholic Press Book Award 2010), The Emergent Christ (Catholic Press Book Award 2013) and Making All Things New: Catholicity, Cosmology and Consciousness—nominated for the 2017 Grawemeyr award and a finalist for the 2019 Michael Ramsey award. Her books have been translated into Italian, Spanish, Portugese, Polish and German.

In 2015 she became general editor of a new book series by Orbis Books called Catholicity in an Evolving Universe, of which there are currently ten books published. She lectures nationally and internationally on topics including evolution, artificial intelligence, consciousness, culture and religion. Sister Delio is also the recipient of a Templeton Course Award in Science and Religion, and honorary degrees from St. Francis University and Sacred Heart University.

About the Connelly Foundation

The Connelly Foundation seeks to foster learning and to improve the quality of life in the Greater Philadelphia area. The Foundation supports local nonprofit organizations in the fields of education, health and human services, arts and culture and civic enterprise. Recognizing that the Foundation's past investments in education have yielded some of its most rewarding results, learning has become the cornerstone of its mission and a uniting umbrella covering all of its philanthropic interests. The Foundation also endeavors to improve the quality of life in the Philadelphia area by promoting a culture of opportunity and civility.