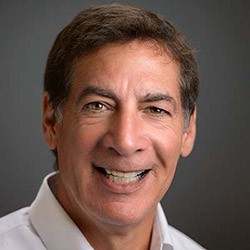 Marc Gallicchio, PhD, professor of History, is the second recipient of the Mary M. Birle Chair in American History. Dr. Gallicchio received his BA and PhD from Temple University and an MA from The Pennsylvania State University.

Dr. Gallicchio’s research focuses on US relations with Japan and China and modern military history. His personal knowledge of Japan, having twice taught there as a J. William Fulbright Lecturer, and once as a visiting professor at Temple University Japan, has given him invaluable firsthand insight into that country's evolving role in the Asia-Pacific region.

Dr. Gallicchio is the author of five books, including Implacable Foes: War in the Pacific, 1944-1945 (Oxford University Press, 2017), a book co-authored with Waldo Heinrichs that won both the Bancroft Prize in American History and Diplomacy and Bronze Award, Book of the Year, Military History Monthly in 2018. His latest book, Unconditional: The Japanese Surrender in World War II (Oxford University Press, 2020), examines the ideological debate over American wartime policy towards Japan and shows how conservative opposition to unconditional surrender fueled the postwar debate over who lost China.

Dr. Gallicchio’s other works include The Scramble for Asia: U.S. Military Power in the Aftermath of the Pacific War (Rowman and Littlefield, 2008), The African American Encounter with Japan and China: Black Internationalism in Asia, 1895-1945 (University of North Carolina Press, 2000), which won the Society for Historians of American Foreign Relations senior book prize, and The Cold War Begins in Asia: American East Asian Policy and the Fall of the Japanese Empire (Columbia University Press, 1988). He has also edited The Unpredictability of the Past: Memories of the Asia-Pacific War in U.S.-East Asian Relations, (Duke University Press, 2007), and co-edited of Diplomacy & Force: America's Road to War, 1931-1941 (Imprint Publishing, 1996).

In addition to earning several writing accolades, Dr. Gallicchio has received grants and fellowships from the US Military History Institute, National Endowment for the Humanities, American Philosophical Society, Earhart Foundation, and the Japan Foundation National Security Archive Project on Power and Prosperity. In 2018, he received the Outstanding Faculty Research Award at Villanova.