The Adela Dwyer–St. Thomas of Villanova Peace Award recognizes an individual or group for outstanding contributions to the understanding of the meaning and conditions of justice and peace in human communities. 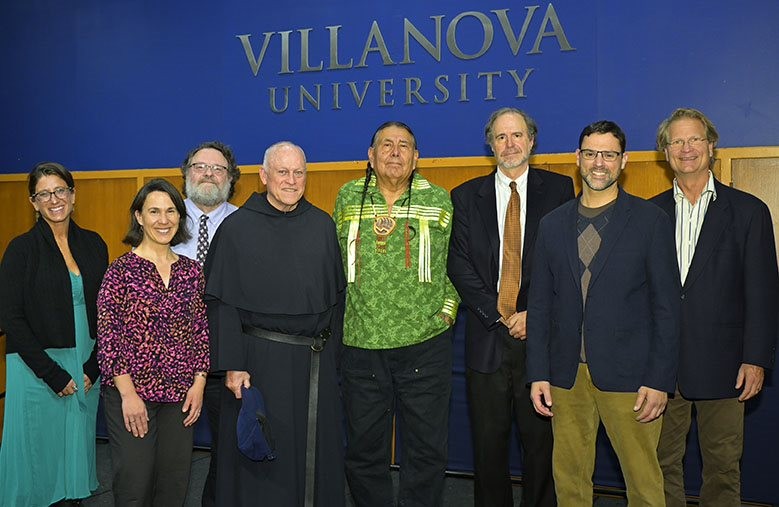 The Center for Peace and Justice Education presented the Peace Award to Indigenous Environmental Network on Monday, October 24, 2022.  IEN's Executive Director Tom Goldtooth accepted the award.  Mr. Goldtooth is an Indigenous change-maker within the environmental, economic, energy, and climate justice movements, who has been defending Indigenous based environmental protection infrastructures for many years. He has recently co-formed the United Frontline Table and its People’s Orientation to a Regenerative Economy.

2021: Poor People's Campaign has picked up the unfinished work of the civil rights movement begun in 1968. People are coming together to confront the interlocking evils of systemic racism, poverty, ecological devastation, militarism and the war economy, and the distorted moral narrative of religious nationalism. Rev. Liz Theoharis accepted the award.

2020: Las Patronas is a group in Veracruz, Mexico, working to provide food and assistance to Central American migrants in transit.

2019: Fr. Gregory Boyle, SJ. is the founder of Homeboy Industries in Los Angeles, Calif., the largest gang intervention, rehabilitation, and re-entry program in the world.

2018: Bryan Stevenson is founder/executive director of the Equal Justice Initiative.

2017: Susan Burton founded A New Way of Life Re-Entry Project (ANWOL) in 1998, dedicating her life to helping others break the cycle of incarceration.

2016: No Strings International is a nonprofit organization which uses the artistry of puppetry to help some of the world's most vulnerable children.

2015: General Romeo Dallaire commanded the United Nations peacekeeping mission in Rwanda prior to and during the 1994 genocide.

2013: Network is a national Catholic social justice lobby that has been advocating for peace and justice in Washington for more than 40 years.

2012: Wendell Berry is a poet, author, cultural critic, conservationist and farmer. Often referred to as a “21-st century Henry David Thoreau,” he has used pen and hand to teach us about our responsibilities for the land and for one another.

2011: Leymah Gbowee helped organize and then lead the Liberian Mass Action for Peace, a coalition of Christian and Muslim women who sat in public protest, confronting Liberia’s ruthless president and rebel warlords.

2010: The Coalition of Immokalee Workers is a community-based organization that strives to build the strength of the community on a basis of reflection and analysis, constant attention to coalition-building across ethnic divisions, and an ongoing investment in leadership development to help their members continually develop their skills in community education and organization.

2007-08: The Philadelphia Mural Arts Program is an anti-graffiti mural program in Philadelphia.

2006: Jonathan Kozol is a non-fiction writer, educator and activist, best known for his books on public education in the United States.

2005: Michael Berg is a local peace activist who stood opposed to Operation Iraqi Freedom. Berg, with his family, were thrust into the national and international spotlight when his son, Nick Berg, was brutally murdered in Iraq in May 2004.

2004: Archbishop Desmond Tutu received the highest award the world can offer—the Nobel Peace Prize—in 1984 for his contribution to the cause of racial justice in South Africa.

2003: Voices in the Wilderness was founded in 1996 to campaign for an end to economic and military warfare against the Iraqi people.

2002: Noam Chomsky is one of America's most prominent political dissidents and a strong advocate for peace and justice.

2001: US Rep. John Lewis from Georgia was one of the key figures in the Civil Rights Movement.

1999: Project H.O.M.E. was founded in 1988 and has been a leader in providing comprehensive and effective services to persons who experience chronic homelessness in Philadelphia.

1998: Rev. Roy Bourgeois, MM, is a Maryknoll priest, social activist and founder of SOA Watch, an organization dedicated to shutting down the infamous School of the Americas (renamed Western Hemisphere Institute for Security Cooperation).

1997: The Catholic Worker Movement (House of Grace) is a collection of autonomous communities of Catholics and their associates founded by Dorothy Day and Peter Maurin in the United States in 1933. Each house has a different mission, going about the work of social justice in its own way, suited to its local region.

1996: Helen Prejean, CSJ, is a passionate advocate for abolition of capital punishment and the author of Dead Man Walking, made into a 1995 film starring Susan Sarandon.

1995: Jim Wallis is an author, preacher, activist and editor of Sojourners, a magazine reporting and analyzing the intersection of faith, politics and culture—making a direct link between strong biblical faith and active social engagement, theology and action, spirituality and politics.

1994: Rev. John P. McNamee is and author and pastor. Inspired by the Rev. Daniel Berrigan, SJ, he wrote several books of poetry and prose championing the rights of poor persons, including Diary of a City Priest, which was made into an inspiring film for public television in 2001.

1993: Eileen Egan was a Catholic Worker, author and founder of Pax Christi, USA.

1991: Habitat for Humanity is a nonprofit, nondenominational Christian housing organization working to build simple, decent, affordable, houses in partnership with those in need of adequate shelter.

1990: John Sobrino, S.J. is an author and advocate for the poor and oppressed.

The award is accompanied by a cash stipend, and the recipient is invited to present a formal address and be recognized by the Villanova community.

The Center for Peace and Justice Education staff requests nominations from the Villanova community and after careful consideration of the list of candidates and supporting materials, they make a decision.

CENTER FOR PEACE AND JUSTICE EDUCATION

The Center often records their events, making them accessible to the wider community. You can watch them on YouTube.

The Center for Peace and Justice Education is closely integrated with the Office for Mission and Ministry and its departments, programs and initiatives.