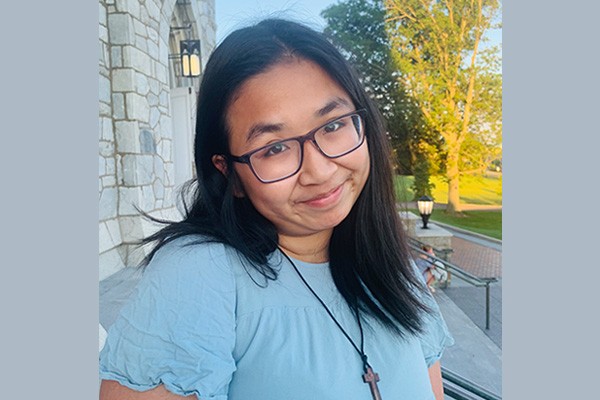 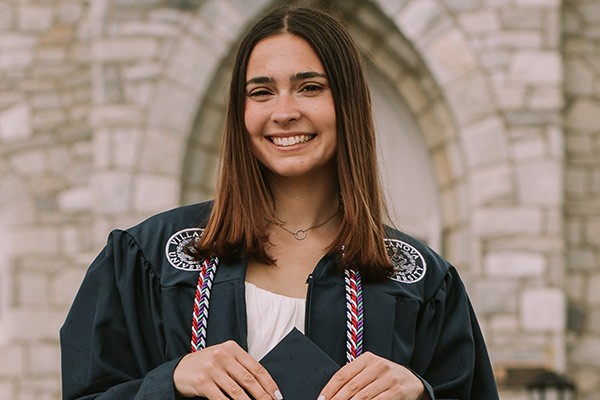 The St. Catherine of Siena Undergraduate Peace and Justice Research Award is awarded annually to an undergraduate student for a research project relevant to peace and justice issues. Submitted papers will be evaluated by CPJE affiliated faculty through a process of anonymous review. A cash award will be presented to the awardee.

The top three students, including the winner, present their work on a panel with a faculty respondent to a University-wide audience.

2017: Katie Boyce, "American’s 'Youth' Go to Nazi Germany: The Movement to Boycott the 1936 Berlin Olympics and the Racial Divide in American Society"

2016: Claire Kimilu, "In the Shelter of Each Other We Will Live: Refugees in Kenya and the United States"

2014: John Catalano, "Empowerment through SNAP: From Hunger to Husbandry"

2013: Kevin Gallagher, "Ethnicity and the State: Philosophies of Memory Preservation in Rwanda"

By submitting your paper, you are agreeing to participate in the panel discussion should your paper be chosen as one of the top three. You will be notified if your paper is selected for inclusion in the panel.

The Dorothy Day | Thomas Merton Award is named after Dorothy Day and Thomas Merton who were two outstanding American contributors on the journey toward peace and justice. Their lives of study, writing, prayer and action have encouraged others to become involved in furthering the cause of justice and peace in the world.

This award is given to a graduating senior with a major, concentration or minor in Peace and Justice Education who has maintained academic excellence and made a significant contribution to the effort to further justice and peace during their four years at Villanova University.

We congratulate Emily Galvin '22 CLAS as a recipient of the 2022 Dorothy Day-Thomas Merton Award. Emily graduates with a minor in Peace and Justice, accompanying her Math major. In her Peace and Justice courses Emily has pursued a number of excellent research projects. In Race, Class, and Gender she analyzed and applied Gloria Ladson-Billings’ Critical Race Theory to American society, exploring racial dynamics throughout history. In Liberation Theology she researched Nicaragua and its exploitative and dependent relationship with the United States. In Native American and Genocide, she researched Tribal Colleges and Universities, connecting the history of boarding schools and systematic elitism in US higher education to cultural revitalization movements through Indigenous systems of higher education.

In the past two years, Emily has participated in Villanova’s Community of Mathematicians and Statisticians Exploring Research program. As part of this project, she researched Pennsylvania’s Fair Funding Formula, a research project that fits into her general interest in justice and equity (especially in relation to race and class) in public K-12 as well as higher education. Through data visualizations, she discovered that severely underfunded districts are primarily schools in the city with extremely low rates of white enrollment; whereas, severely overfunded districts are primarily schools in rural areas with extremely high rates of white enrollment. In addition, Emily created programming codes to ensure the continuation of the Fair Funding Research following her graduation.

Next year, Emily will start studying toward a Master’s degree in Data Science at Rowan University. We are proud of you, Emily, and glad you are staying close by. Congratulations!

We also honor Victoria Sanders '22 CLAS as a recipient of the 2022 Dorothy Day-Thomas Merton Award.

Victoria hails from Erie, Pennsylvania and is a Comprehensive Science major and Peace and Justice minor. Victoria cites the work she did in Tim Horner’s The Nature of Genocide and Ruth McDermott-Levy’s International Health as some of the most impactful. In the former she focused on the genocidal nature of treatment of members of the LGBTQ community in Chechnya, and in the latter, on health inequities. As an aspiring doctor, Victoria found an internship with the Female Founders Alliance, a start-up company whose primary goal was to provide transparency about healthcare providers and their prices.  But during COVID, she shifted to becoming a PPE provider, which allowed her to see firsthand how the shortage, inequities, and exclusion forced people to go without healthcare.

Outside the classroom, Victoria was involved in a number of service groups and initiatives. She was a member of RUIBAL as a freshman, and a member of HHAW all four years, serving as Head Chair in her junior and senior years. As a junior, she also served as a tutor of English and joined Villanova’s Telebrigades program where she learned through virtual sessions about the healthcare system in Honduras, participating in one of its clinics. Finally, she regularly works at Prevention Point in Philadelphia and serves at a local food bank in her hometown.

While her science classes have given her the foundation she needs to pursue medical school, Victoria's Peace and Justice courses have inspired her and transformed her. In recognition of her work and commitment in all these areas, we are delighted to present Victoria with our Thomas Merton/Dorothy Day Award.

Each year, Villanova University sponsors The Thomas J. Mentzer Award. The Award honors a graduating Villanova senior who has contributed significantly, through his or her service, to "expanding opportunities for the poor and marginalized." The award consists of a cash stipend and an inscribed plaque.

The award remembers Thomas J. Mentzer, a Villanova graduate of 1955, who later became a faculty member in the History Department. He was active in many of the social issues of the time, including work to oppose racial conflict and segregation. He died in an automobile accident in 1968.

The Center for Peace and Justice Education is pleased to present the 2022 Thomas J. Mentzer Award to Natalie Nwanekwu '22 CLAS. Natalie is graduating with a double major in economics and criminology. She conducted her studies through the honors program as a presidential scholar of Villanova University. Natalie is an extraordinary student. When asked about the most memorable moments in her college career, she stated that two projects stand out. First, is her work with Villanova University's Black Pre-Law Student Association, which was awarded the 2022 ‘Organization on the Rise’ Award. And her second notable moment came recently when she was awarded the 2022 Meyer Innovation and Creative Excellence Award. This honored her commitment to leadership throughout her college career, but specifically for her small business, Heiress Eyes, which helps to promote professional development opportunities for young women in Nigeria.

Our committee was struck by the way that Natalie’s academic and extracurricular endeavors embody the spirit of the Mentzer Award. Her view of her life is so much bigger than just her own success. This acknowledgement is our way of extending the mission of the CPJE out into the world. And we have full confidence that Natalie will only continue to expand opportunities for the poor and marginalized.

The Solidarity Award is presented to a graduating senior or seniors concentrating in Peace and Justice Studies in exceptional circumstances to recognize distinctive service to the cause of justice and peace.

After 45 years of teaching at Villanova University, beloved philosophy professor Joseph Betz, PhD, retired in May 2011. Dr. Betz’s knowledge of social and political issues, and his commitment to active involvement in anti-war and social justice movements in the US and around the world inspired generations of Villanova students and countless colleagues. Among his many contributions to Villanova, Dr. Betz served as the faculty adviser for Amnesty International for 30 years. He is the longest serving faculty adviser for any Amnesty chapter anywhere in the United States. Dr. Betz was the 2009 recipient of the Lawrence C. Gallen, OSA, Faculty Service Award.

In honor of his steadfast leadership in countless social justice and peace movements, and his unflinching resolve to stand against injustice wherever it is found, the Center for Peace and Justice Education renamed its "Solidarity award" for Dr. Betz. This tribute is a small acknowledgment of the tremendous impact of a man who lives his commitment to peace and justice each and every day.

Kaylan Purisima graduated with double majors in Peace and Justice and French and finished her Honors thesis examining the past and present policies involved in sexual violence against Indigenous women. Beginning in her freshman year, Kaylan has devoted most of her time in and outside the classroom to addressing different issues of human rights abuses through her involvement in various groups on campus. Her greatest impact has been in her role as co-president of Amnesty International and No Lost Generation, wherein she inaugurated Immigration Week last year, which offered an array of events and activities highlighting the plight of those most vulnerable in a search for asylum, home and safety. This year's Immigration Week was highly successful and has received the recognition and support of Fr. Peter's office. Congratulations, Kaylan, and many thanks for all you have done in service to social justice!

The Justice in Business Award is no longer active as the designated funds for the honor have been fully utilized. We congratulate all previous recipients as well as current students who continue to pursue justice through their engagement with business.

The Medallion Awards are conferred each year by the College of Liberal Arts and Sciences to graduating Seniors who have excelled in their study during their undergraduate years at Villanova. The medallion award for a Major in Peace and Justice is named in honor of Gustavo Gutierrez, a Dominican priest and a prophetic intellectual widely regarded as the of the founder of Liberation Theology.

Alli has been a remarkable voice for Peace and Justice in and out of the classroom. She completed her Peace and Justice senior thesis during her junior year with an excellent project under the mentorship of Dr. Samer Abboud. It’s title: Sex Strikes: How Hegemonic Interpretations of the Cis-Gender Female Body Obscure Women’s Leadership in Nonviolent Movements. She has interned with NETWORK Catholic Social Justice Lobby and conducted research around faith-based arguments for a Civilian Climate Corp. She served as a CRS Ambassador, working especially around issues of immigration and asylum, and she has also been involved with these issues through work with the excellent organization, Al Otro Lado. Alli has additionally worked on issues of race and with the group Showing Up for Racial Justice and has helped support women transitioning out of the criminal justice custody with Sisters Returning Home. Alli brings her amazing gifts of mind and heart to the work of justice. She is deeply attentive to human relationships and relationality and honors them in all her work for social change.

In the words of some Villanova faculty: “Alli is a deep and reflective thinker who is constantly challenging herself to relate to the world in more humane, ethical, and generous ways. Her thinking on issues related to peace, equality, justice, and community is always nuanced and sophisticated, and she conveys her views with fluency and lucidity. Her skills in building community and her ardent passion for social justice have enriched all of those around her."

CENTER FOR PEACE AND JUSTICE EDUCATION