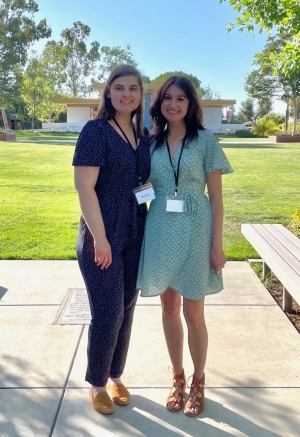 Kahn discussed her work, “Embodied and Empowered: A Critical Analysis of Margaret Atwood’s The Handmaid’s Tale.”

"Presenting at the CCL conference was an enriching experience. Not only was I given the opportunity to share my scholarship on a topic that I'm passionate about but also was afforded the chance to partake in thought-provoking dialogue during the question-and-answer section," Kahn said. "It was a pleasure to meet other scholars from across the country and learn from each other; I hope to present at the same conference next year."

Salomon presented “Gardens in ‘a sizzling wasteland’: Margaret Atwood’s The Year of the Flood as a model for Christian environmental restoration.”

“Attending the conference allowed me to network with, and learn alongside, like-minded individuals who encouraged and challenged me intellectually throughout the week, " said Salomon. "It was truly empowering to be united with others in a common focus of faith and literature, particularly as that focus revealed diverse opinions and practices on how these matters can, and do, intersect. I’m excited to conduct my own research in some new areas of scholarship I learned about, and hope to participate in the conference again next year.”

The Conference on Christianity and Literature is an interdisciplinary society dedicated to exploring the relationships between Christianity and literature. Organized formally in 1956, CCL is dedicated to both scholarly excellence and collegial exchange and includes hundreds of members from a variety of academic institutions and religious traditions from the United States, Canada, and more than a dozen other countries.