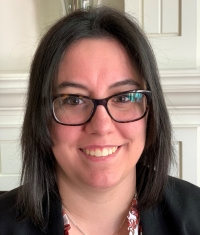 Katherine Prudente ’20 was drawn to Villanova Law for the unique opportunities provided by its six in-house law clinics. It was only after she arrived and began working on her own cases in the Interdisciplinary Mental and Physical Health Law Clinic that she realized exactly how invaluable these experiences would be.

After completing her undergraduate degree at the University of North Carolina at Chapel Hill, Prudente worked for four years in the insurance industry, where she found herself drawn to the legal aspects of her job and ultimately decided to pursue a legal career.

Once at Villanova Law, Prudente became more interested in the health law field. During her 3L year, she enrolled in the Health Law Clinic, working under the supervision of Michael Campbell, Professor of Law, Director of Clinical Programs and Director of the Interdisciplinary Mental and Physical Health Law Clinic, and representing real clients with critical legal issues.

Prudente not only has a professional interest in the Health Law, but a personal one as well. “My dad is disabled; he has multiple sclerosis,” explained Prudente. “Seeing his interactions with the healthcare system as he has struggled to get the services and devices he needs, and  the guardianship and power of attorney issues that arise, those are all things I’m actively engaging with in the Health Law Clinic.”

Prudente was assigned a case with a client who suffers from severe vertigo, panic attacks, depression, migraines, and numbness of his arms, legs, ankles and feet. He came to the Clinic requesting a power scooter, which had been previously denied by his healthcare provider based on medical necessity. Prudente became his primary advocate—she researched the law and conducted multiple interviews with the client, his home health aide, his physical therapist and others during the course of her representation.  She learned that he had been largely confined to his home for over 25 years because he was a fall risk and couldn’t leave the house by himself. Upon further investigation she learned that the insurance company had denied his request after applying the incorrect legal standard.

On the day of the hearing, Prudente made an opening statement and performed oral examinations of the client, their doctor and the health insurance company. She presented evidence that the wrong standard had been applied, and if the correct standard had been applied,  he undoubtedly would have been granted the motorized scooter. The insurance company argued that the electric scooter was not medically necessary because he could get around his apartment without it. Prudente proved that the law required the plan to take into account her client’s need to be active in the community, not just at home. Prudente’s argument was so thorough that the insurance company agreed to pay for the client’s motorized scooter before the hearing was even over—a major win for both Prudente and her client.

“This case brought everything full-circle for me and reinforced why I wanted to be in the Health Law Clinic,” Prudente said. “The client’s argument for why he needed a motorized scooter were the same arguments my dad made 10 years ago when he went through a similar dispute. Many times, people go into proceedings without an attorney to help their case. But when we can help our clients get the services they need, they can become an engaged member of the community and have better quality of better life.”

Prudente believes her clinic experience has been priceless in her growth as a student and a future lawyer. She prepared witnesses, worked on briefs for appellate hearings and gained valuable knowledge within the courtroom. The clinic setting provided her with a wide range of experiences and showed her that not all cases fit into a standard mold. “The work we do in the clinics really melds our coursework into a more cohesive picture of how the law actually works outside of the classroom,” stated Prudente. “The people who come to the clinic for our services put a face to this, that no textbook ever could.”

“Experiencing all of this while I’m still a law student has been incredible. I’m in charge of my own cases but I still have the benefit of a knowledgeable faculty member helping me along the way. It’s a credit to how dedicated the clinic staff is at Villanova Law. They learn what works for their students and can provide a hands-on approached based on their needs. I believe it’s made me a more thoughtful and conscientious advocate, knowing that I’ve had all of these experiences and I’ve received such beneficial input from these experts.”