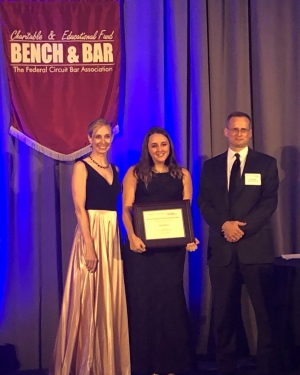 She originally wrote her winning paper, titled When is Enough Enough? What Constitutes an Adequate Written Description of Genus, during her 3L year at Villanova Law for the Advanced IP and Cyberlaw Seminar with Michael Risch, Vice Dean and Professor of Law. “Professor Risch was crucial in my editing process and continuously countered my arguments such that I addressed all sides of the issue,” said Albanese.

The paper focused on issues that occur when a patentee tries to claim a biological genus – a term used by scientists for biological classification – by disclosing some of the species within that genus, which is common practice in pharmaceutical and genetic patents. The paper analyzed cases on the topic to assess what level of disclosure is sufficient in the eyes of the courts. It also provided best practices for patent drafters, attorneys and judges in writing and interpreting such patents.

“To win the Federal Circuit Bar Association George Hutchinson Writing Competition is a great honor,” stated Albanese. “The Federal Circuit is the country’s most trusted authority on patent law and to get their seal of approval on my work is an incredible feeling.”