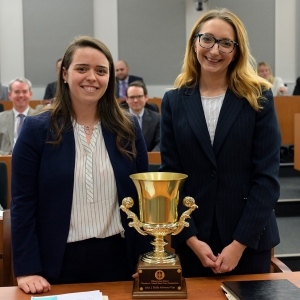 After weeks of preparation and preliminary trials, the final round of the 60th Annual Theodore L. Reimel ’24 CLAS Moot Court Competition concluded on Thursday, November 21, 2019. The competition is an annual intra-school tournament and a hallowed tradition at Villanova Law, named in honor of the late Theodore L. Reimel, Judge for the Pennsylvania Court of Common Pleas from 1953 to 1973. The trial is designed to foster student development in written and oral advocacy through simulated appellate argument.

The case argued in this year’s competition was focused on issues of inmates’ rights, protection of the prison population and violations of the Eighth Amendment to the United States Constitution.

The unprecedented all-female semi-final round boiled down to a final round which consisted of four 2L students: Alice Douglas ’21 and Mary Haggerty ’21, who argued for the petitioner, versus Karina Norwood ’21 and Cecilia Carreras ’21, who argued for respondent. In an impressive trial, it was Norwood and Carreras who were victorious. Carreras was also named Best Oralist in the Final Round.

The final round was presided over by The Honorable Barry T. Albin, Associate Justice of the Supreme Court of New Jersey, The Honorable Susan P. Gantman ’77, President Judge Emeritus of the Superior Court of Pennsylvania and The Honorable Marjorie O. Rendell ’73, Senior Judge of the United States Court of Appeals for the Third Circuit. Judge Rendell commented that it was the best round of arguments she has seen to date.