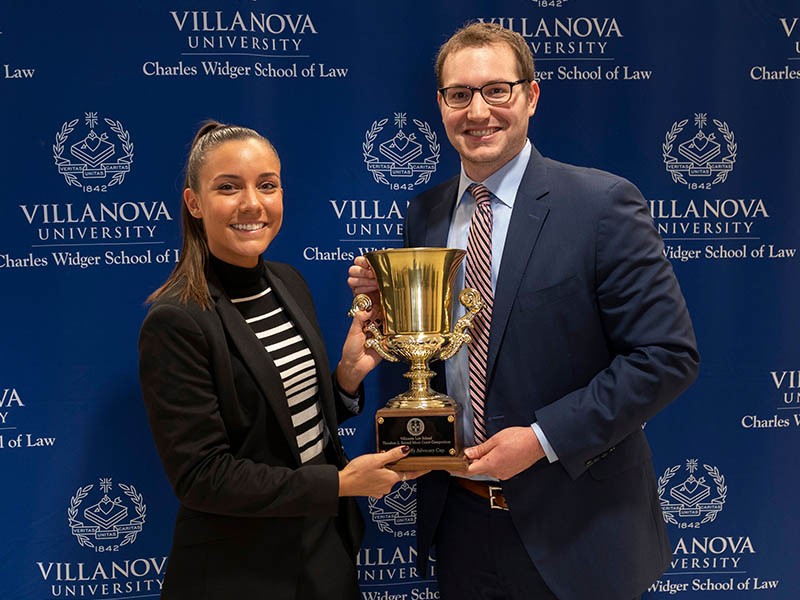 As an unexpected pre-winter snowstorm blew in on November 15, Villanova Law students on the Moot Court Board were faced with a decision—whether to go ahead with the Finals of the 59th Annual Theodore L. Reimel ’24 CLAS Moot Court Competition or attempt to reschedule for a later date. Named in honor of the late Theodore L. Reimel, Judge for the Pennsylvania Court of Common Pleas from 1953 to 1973, the competition is designed to foster student development in written and oral advocacy through simulated appellate argument.

The Finals are a highlight of the academic year, in which four student finalists argue a case before a panel of real judges and an audience of family and friends in the Martin G. McGuinn ’67 Ceremonial Courtroom at the Law School. Over the course of three rounds of argument held over two weeks, volunteer judges, practicing attorneys and faculty members had whittled the initial eight teams down to just two:  Rodrigo Rivera '20 and Kaylyn Wernitznig ’20 versus Vanessa Huber ’20 and Scott Zlotnick '19.

The weather, however, was not cooperating.  Snow and ice made roads treacherous and travel nearly impossible. It was unclear whether the judges, who were coming from New Jersey, Philadelphia and Delaware, could make it to Villanova safely and on time. With Thanksgiving and final exams right around the corner, dates for rescheduling were limited. The Board was also concerned for the competitors, who had just spent weeks preparing for the case and in preliminary rounds, and were prepped and ready to go.

In consultation with their faculty adviser, Professor Jessica Webb, the Board decided it had no choice but to postpone the final round and hold it the following day with faculty judges. With Professor Webb’s assistance, they sprang into action and called the scheduled judges to inform them. Three faculty members—Doris Brogan, Andrew Lund, and Todd Aagaard—quickly volunteered to fill out the bench for the next day. The students were thrilled that the Finals were able to go forward.

On Friday, November 16, the final round of the Competition was held as the teams vigorously argued their positions on two difficult issues involving securities fraud and class action lawsuits. Ultimately Scott Zlotnick ‘19 and Vanessa Huber ‘20 emerged victorious and were awarded the John J. Duffy ’62 Advocacy Cup. The winner's cup is named in honor of Mr. Duffy, a widely recognized and accomplished criminal trial lawyer in Pennsylvania.