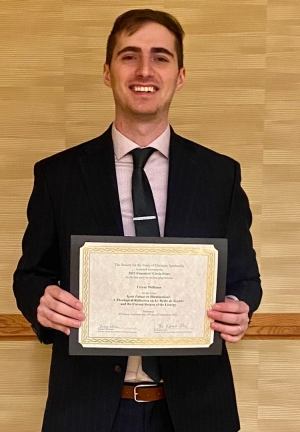 Theology doctoral student Trevor Williams was recently honored by the Society for the Study of Christian Spirituality (SSCS) with its Founder's Circle Prize, which recognizes emerging scholars in the discipline. Williams was invited to present his paper at the American Academy of Religion (AAR) Annual Meetings this past November in Denver.

Williams also earned a cash prize and a two-year membership to SSCS. His essay “Ignis Fatuus or Illumination? A Theological Reflection on Le Mythe de Sisyphe and the Eternal Return of the Liturgy" will be published in an upcoming issue of the SSCS journal, Spiritus: A Journal of Christian Spirituality. In his paper, Williams engages in a reflection on Albert Camus’ The Myth of Sisyphus and incorporates Pope Francis’ vision of liturgical formation. The essay deals with issues like practical atheism, low Mass attendance, and the overall relevance of contemplation.

"I am honored to be selected for the Founder's Circle Prize," says Williams. "After being informed that I won, I quickly made plans to attend AAR with my wife, mom and younger brother. This presentation was particularly exciting because I was the only panelist at a special session, which was a first for me. The organizers were gracious and made their interest in my work very clear. This kind of affirmation is an important part of my development as an emerging scholar. I am glad that I was introduced to this society so early in my career. I think it will be important for my future."

In the section below, Williams discusses his inspiration for and development of his paper and how it connects with his dissertation work.

The idea itself began to form in 2018 after I heard a series of brilliant lectures at Vanderbilt University. Victor Judge offered free copies of Albert Camus’ book The Plague and asked that we read the text prior to the event. Judge offered a close reading of the text that included focused points of interpretation. I was simply hooked after that, primarily because I found Camus’ contentious feelings toward Augustinian Christianity to be interesting. His critique of the emptiness of modern life has also become an important starting point of reflection that I hope to include at some point in my dissertation. I only had an idea for this paper, however, after taking a class on liturgy & ethics by Bruce T. Morrill, SJ, I was writing a response paper for that class and something with Camus’ The Myth of Sisyphus just clicked. I therefore began writing something in earnest, even though I knew it would not be ready for several years. I started classes at Villanova University in 2019, and this only helped feed the development of this project. I presented a very early version of it in the section “Dynamics of Belief and Unbelief in Modern and Contemporary Fiction” at the Catholic Imagination Conference held at Loyola University Chicago in 2019. I took what I was learning about St. Athanasius at the time and tried to compare their differing conceptions of the absurd (obviously using different words and meanings but with a conflict that produced something rich). This presentation was my first academic conference as a doctoral student. Over the last three years, I have gradually become extremely interested in writing about Pope Francis, his critique of practical atheism, and the continued interpretation of Vatican II. I discovered the Founder’s Circle Prize last May and thought my project was ready for something bigger. The paper ended up being an interpretation of Albert Camus’ book The Myth of Sisyphus that includes observations about liturgical formation put out by Pope Francis. I am happy with the result.

One of my favorite parts about the rhetorical frame of the paper is that I took the risk of being explicit about my confessional perspective. I directly appealed to the problem of low Mass attendance, which was risky because it could potentially limit the scope of who would find an interest in my argument. In other words, I initially worried that it would simply be easier to submit an essay to the Society for the Study of Christian Spirituality if it was framed in a more general way. The reality that I discovered, first by winning the prize, but then by presenting my work at AAR, was that the scholars present there were very open to my perspective. In fact, I think it would have hurt my paper if I had not framed it the way that I did. The key ingredient here is not simply that I was forthright about my confessional perspective but that I did so with a rigorous attention to what Camus had to say, in addition to being clear about my own self-implication in the project. I think that helped others from different confessional perspectives find something useful in what I was saying. I sought to faithfully represent Camus’ critique of Christian transcendence in its fullest, most potent form. I integrated points from Camus’ early writings on the problem of evil and Augustine’s influence on that issue. However, my next move was not even to refute Camus (and especially not to flatten my theology according to his boundaries). I sought to do something more complicated than either of these moves. In my paper, I legitimately dialogue with The Myth of Sisyphus and draw out insights from the conversation. Pope Francis was a great help in that regard. I find myself being transformed in my reading of Camus because he warrants that respect and I continue to disagree with certain aspects of his thought. I explicitly noted this in my paper with no apologetics involved.

The essay itself is thematically connected to my dissertation research here at Villanova. I am writing on the French philosopher Emmanuel Falque, who is largely a background figure in my paper. Falque’s interest in transformation and desire to continue thinking among our “contemporaries” provides a great starting point. His emphasis on a “loving struggle” was especially at work in my efforts to grapple with Camus’s insightful challenges to transcendence and Christian faith. I might even venture to say that this paper was one of my first attempts to adapt Falque’s method for my own purposes. Incidentally, one of Falque’s most intriguing characteristics as a philosopher is to emphasize animality as God’s access to human corporeality. This includes the embodied character of human experience and the organic nature of the body, including the interior chaos of our passions and drives. I think his vision of corporeality has much to teach sacramental theology and that is an area that I hope to advance in my dissertation. Camus, as a French Algerian, has numerous resonances with Falque’s philosophy and their mutual focus on human immanence and finitude provides a lot of food for thought. I hope to have a whole chapter of my dissertation that is devoted to Falque’s engagement with his contemporaries and how that transforms his own perspective over time. Overall, the recognition that the Founder’s Circle Prize represents helps further confirm my research interests. The positive response to my presentation also improved the paper itself, and I hope it is eventually published in Spiritus.