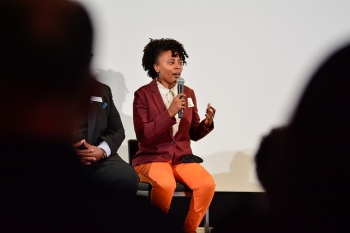 VILLANOVA, Pa. – Villanova University Theatre alumna Marissa Kennedy ’18 MA approached the project with the same enthusiasm, determination and creativity that has propelled her budding artistic career. She also drew inspiration from a connection to her own family’s values that she discovered while researching her new play about the life of James Forten, written for the Museum of the American Revolution in Philadelphia.

“This project as a whole shows the deep contributions of Black Americans, African Americans to the United States and what we are today, right?” Kennedy said in this Philadelphia Inquirer article. “You know, there’s this phrase that ‘you reach back as you climb,’ or something close to that — bringing other people with you as you advance. That was a common phrase, a common lesson that my family taught me, and you can see that in the Fortens.”

Kennedy’s original theatrical piece Meet James Forten is a one-person performance that explores the story of historical figure James Forten, a free, Black Philadelphian who served on a privateer ship during the Revolutionary War and later became a prominent sailmaker, businessperson and abolitionist. The play debuted this past fall and continues this spring in conjunction with the museum’s special exhibition, Liberty: Don Troiani’s Paintings of the Revolutionary War. The museum also plans to include the play in its upcoming 2023 exhibition on James Forten and his family.

Said Michael Idriss, African American Interpretive Fellow at the Museum of the American Revolution, “Marissa’s work gives vibrancy and life to the story of James Forten, transporting the viewer to his Philadelphia. Marissa wanted guests to understand not only the person but also a sense of the changing world that he was encountering. She did this by ensuring that viewers could understand the tools and events that shaped James Forten's early life.”

Kennedy had written historical monologues for Philadelphia’s Stenton House and Johnson House, which she says helped prepare her for the Forten piece. Even with a few works under her belt, seeing Meet James Forten performed “gave me goosebumps,” she said. “Until you are in the audience and actually see the performance, it is hard to think ‘I did this.’”

When she is not writing original works, Kennedy serves as a Special Projects Fellow with Philadelphia Young Playwrights, an organization that partners with educators to bring playwriting into classrooms and community settings across the region. She also serves as the Assistant Technical Director with the Harriton High School Theater Company.

Out of the Shadows emanated from Kennedy’s master’s thesis, a project that she felt could be further workshopped and produced. “I’m not done with this,” she thought. Through her connections in Villanova Theatre, Kennedy reached out to Fringe, which accepted the proposal and helped prepare the play for production. For Kennedy, that endeavor reflected the quality of the Villanova Theatre program.

“The network is key. Villanova Theatre’s reputation is big in Philadelphia,” Kennedy said. “People know what your experience was and know what you were trained to do. Villanova Theatre is intense and can seem crazy if you are looking in from the outside, with all of the different responsibilities, but you learn the technical aspects, you perform on stage, you learn theatre management. The experience helps you become a professional theatre practitioner. It gives you confidence out of the gate.”

"Villanova Theatre’s reputation is big in Philadelphia. People know what your experience was and know what you were trained to do. Villanova Theatre is intense and can seem crazy if you are looking in from the outside, with all of the different responsibilities, but you learn the technical aspects, you perform on stage, you learn theatre management. The experience helps you become a professional theatre practitioner. It gives you confidence out of the gate.”

Kennedy points to the partnerships and mentorships that she developed at Villanova as essential to her success. She had great conversations with alumni, including Kimberly Fairbanks ’11 MA and Jessica Bedford ’10 MA, while Sean Connelly ’17 MA, who worked at Historic Philadelphia at the time, helped her discover the historical monologue writing projects.

Villanova faculty were instrumental in Kennedy’s development, as well. “I can say something about how each and every Villanova Theatre faculty member helped me grow as an artist, as a writer and as an actor,” Kennedy said.

The Rev. David Cregan, OSA, PhD, Associate Professor of Theatre, served on Kennedy’s thesis committee and was witness to Kennedy’s growth in the program.

“Marissa has the grace of an inquisitive mind for research and an open heart for artistic expression,” says Father Cregan. “Her perspective and expertise were luminous. Truly, Marissa was the ideal student for our program, which harmonizes theatrical theory and practice. Plus, her compassionate presence strengthened and inspired our community.”

Currently, Kennedy is working on a new writing project and exploring further education in theatre. She also continues to act “when things pop up,” she says. She also performs as part of the Young Playwrights annual playwriting festival. “Acting helps your writing. It helps with dialog and pacing, staging and storytelling,” she said.

While the creative life has its challenges, Kennedy relishes it.

“I’m living in a big, beautiful cloud bubble of all the things I am interested in,” she said. “My personal philosophy is to be flexible. Things don’t always work out, but I am blessed to be able do things in the sphere of what I want to do.”