Once home to the Lenni Lenape Indians, the land was first settled in 1663-1665 by a group of Quakers from Radnorshire, Wales. Seeking religious freedom, the settlers immigrated to a 5,000 acre section they purchased from William Penn, which had been granted him by the Crown. Radnor Township, home to Villanova University, was officially founded in 1682 in what was known at the time as Penn's Greene Countrie.

Through the Revolutionary War, the area was a no-man's land between Philadelphia to the east and Valley Forge to the west. It was the site of several skirmishes between George Washington's Continental Army and the British. One of the inns along the way, the "Sorrel Horse", is said to have sheltered General Washington and General Lafayette during the encampment at Valley Forge, 1777-1778. The inn still stands today on the campus of the Agnes Irwin School, about one-half mile from the University.

Years later, traffic and development came to what would become the Main Line area with the opening in 1794 of a macadam toll road heading west out of Philadelphia, the Lancaster Turnpike, the first toll road in America. The University is located on this Lancaster Pike, US Route 30, although it is now a commercial thoroughfare. It was in 1842 that the first of many great local country estates was converted to institutional use when the Brothers of the Order of Hermits of St. Augustine established the Catholic College of St. Thomas of Villanova, now Villanova University. 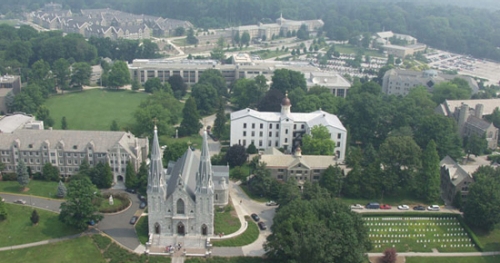 The name "Main Line" is the title given to the group of suburban communities west of Philadelphia. The communities grew along the main line of the Pennsylvania Railroad which came through Villanova in 1832. It was originally built by wealthy industrialists to ease their commute from Philadelphia to their country homes, gentleman farms and summer residences. The railroad, which transported goods and mail as well as people, quickly prospered as did the surrounding developments and businesses.

Today there is a potpourri of communities (Wynnewood, Ardmore, Haverford, Bryn Mawr, Rosemont, Villanova, St. Davids, Wayne, etc.) named after the railroad stations, preserving the ambience and beauty of the area; all within easy commute to center city Philadelphia. The townships and local communities have worked diligently to preserve open space and the natural greenery, and the Villanova University campus handsomely reflects this heritage.