Despite being an awardee, Joseph “Joe” Krackeler, PhD, ’59 ChE was unable to attend the College of Engineering’s 41st Annual Engineering Alumni Awards reception on October 28. The explanation for his absence was certainly unique—Dr. Krackeler was playing in the USA 80+ vs. Canada 80+ Ice Hockey Championship in Ottawa. Two days later, he and his wife Rita traveled to Villanova where Drosdick Endowed Dean of Engineering Gary A. Gabriele, PhD, presented him with the Engineering Alumni Professional Achievement Award. 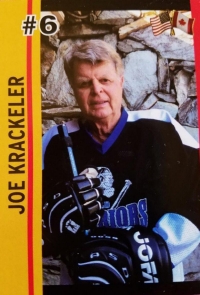 Naturally, the game was a topic of conversation during Dr. Krackeler’s visit. “I grew up playing pond hockey, but there was no team at Villanova when I was there in the mid-1950s,” he explains. “I thought about starting a team, but my schedule was already full given the demands of the engineering curriculum.” It wasn’t until he was in his 40s that Dr. Krackeler started playing again. “I saw an ad for an adult team,” he says, adding, “I’m the oldest one in the bunch.”

A resident of California, Dr. Krackeler was joined in the U.S. vs. Canada championship game by octogenarians from Florida, Colorado, Massachusetts, Illinois and Alaska. Hosted by the Canadian 80+ Hockey Hall of Fame, the game was played as a tribute to “Canada 150” and the match-up is expected to evolve into an annual challenge.

His prowess on the rink aside, Dr. Krackeler has a fascinating biography. After graduating from Villanova, he earned a master’s degree from Princeton University and a doctorate in Polymer Chemistry from Northeastern University. He worked for Arthur D. Little, Inc. for three years, before moving to Raychem Corporation, where, over two decades, he held titles including manager, Thermoplastics Development; technical manager, Plastics and Chemicals Division; director of technology, Thermofit Division; director of marketing, Telecommunications Division; and vice president, Communications Marketing.

Dr. Krackeler left Raychem in 1986 to serve as a technical consultant in the polymer chemistry field, working on materials development for plastics, rubbers and adhesives, technical due diligence, insurance claims and expert testimony for patents. His varied professional experiences have included owning a baseball lithograph company, founding a cheesecake company and serving as an instructor in chemistry and in property management. He has also been a successful real estate investor in the San Francisco Bay area for more than 40 years.

When he’s not on the ice, Dr. Krackeler enjoys golf, skiing, playing the piano and spending time with family, including his seven grandchildren.