Imagine if there was a way to bundle Shark Tank, the Amazing Race and The Apprentice into one 24-hour-long competition. Look no further than the 24 Hour Imagination Quest (24HR IQ) 2017! Presented by Villanova’s Engineering Entrepreneurship program, this unique event delivers prizes for the top three finishers, while all participants gain valuable experience working as teams to achieve a common goal.

Kicking off at noon on Saturday, November 18th, this year’s 24-HR IQ began with the formation of teams, after which each group was given an opportunity to spend time observing and seeking to identify areas of life on campus that they could improve. After coming up with three ideas, teams interviewed students and staff to determine which one to move forward with. The first day culminated with a short preliminary pitch to the judges, delivered in the elevator in CEER to embody the “elevator pitch” concept. Teams were then ranked based on their day-one performances.

Day two began with each team developing a prototype model of its product and creating a logo and marketing campaign. These were utilized at an afternoon “tradeshow,” which allowed groups to reveal and market their product while receiving a final round of valuable feedback. Last but not least, for the finale, each team presented in the “Cat Cage,” Villanova’s very own version of “Shark Tank,” where the judges choose the final winners.

This year’s first-place team, winning $1200, was “Team C3” with “Uni-Park,” an app designed to find the right parking spot for you on campus using sensors to detect available locations. Team members included Matt Bakey ’19 ME, Sagar Bhatia ’18 EE, Christopher LeClerc ’19 EE and Matt Massina ’19 CpE, as well as one student each from Temple University, Jefferson University and University of New Haven. 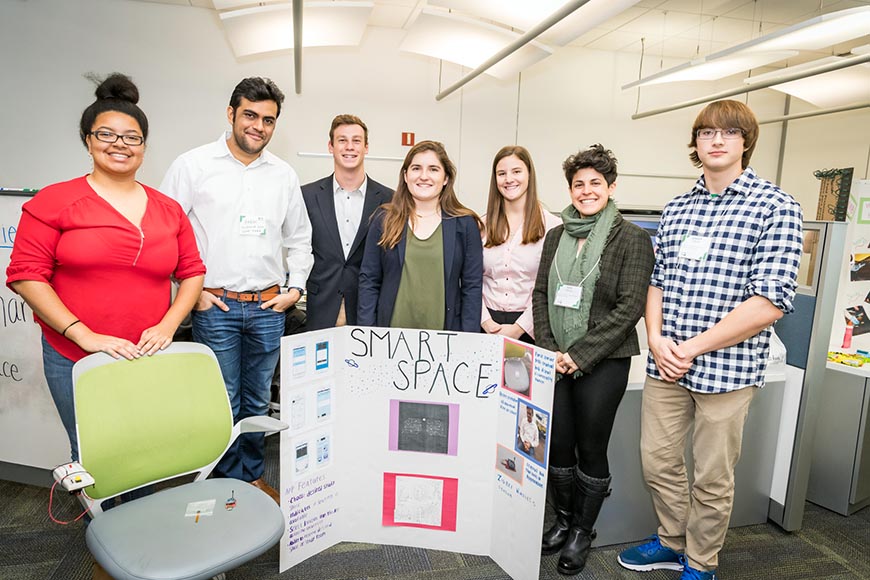 Coming in second place for $600 was “Team Amplifiers” with their app “Smart Space.” This app would use sensors to determine where there are open rooms or tables in public areas such as the library, allowing students to easily determine where they should go to find an empty space to study. The team was comprised of juniors Ashley Meier EE, Anthony Busa ChE and Lauren Tschirch ME, joined by four students from other schools. 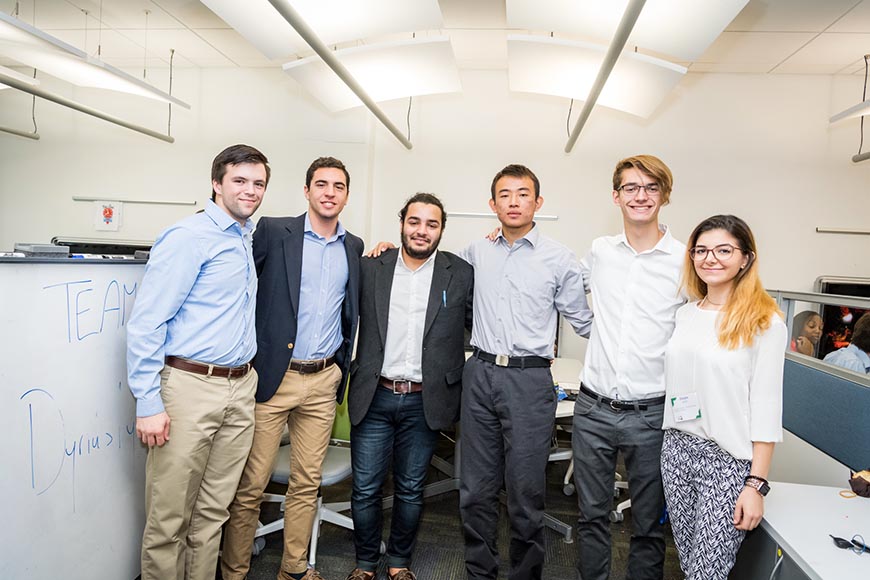 Lastly, the third-place, $300 winner was “Team Dynasty.” Their app, “Dybs” served a similar space-saving function, allowing students to reserve rooms in an easy and efficient manner while only providing access to those students at the time the room is reserved. “Team Dynasty” members were Mechanical Engineering juniors Demetri Kyriannis and Michael Valentine, as well as Kaixuan Ji ’21 EE and three non-Villanova students.

Overall, there were 32 participating students, with 17 coming from Villanova (all but one from the

College of Engineering). Sponsored by the Kern Entrepreneurial Engineering  Network (KEEN) and supported by the Villanova Institute for Creativity and Entrepreneurship, the program has had a very successful six-year run, and many winners go on to participate in the Villanova Student Entrepreneurship Competition and other programs during the spring semester. 24HR IQ encourages students to work together in multidisciplinary teams in order to gain experience solving real-world problems.