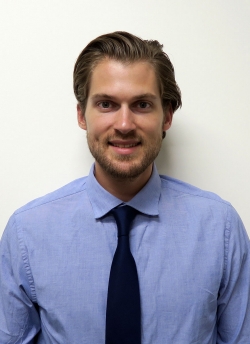 The Marconi Society, dedicated to furthering scientific achievements in communications and the internet, will honor Villanova Engineering alumnus George MacCartney Jr., ’10 EE, ’11 MSEE, with the 2016 Marconi Society Paul Baran Young Scholar Award. A PhD candidate at New York University, the 27-year-old researcher is being honored for his outstanding academic achievements and his work in millimeter wave wireless communications.

“George has developed foundational knowledge that has truly changed the future of wireless communications,” says NYU Wireless Professor Theodore Rappaport, MacCartney’s advisor. “Using novel measurement equipment that he built from scratch, he proved to the world that millimeter wave wireless communications could work well in urban non-line-of-sight conditions at frequencies above 70 Ghz—something that was not believed to be true before he did it. He literally has influenced the world's standard bodies with his work.” The FCC’s recent vote approving millimeter wave communications above 70 GHZ is based partly on his findings, according to Dr. Rappaport. MacCartney's work has resulted in 25 major papers in top peer-reviewed journals and conferences.

As MacCartney continues his work on millimeter wave wireless communications, he considers other goals, including starting his own company in the wireless space. He also hopes to continue in academia, in part because of the great teaching he has experienced. MacCartney credits two Villanova University professors with inspiring him. “Drs. Kevin Buckley and Robert Caverly, whom I had as advisors and professors for undergraduate and graduate studies, made learning exciting, were able to teach the fundamentals in clear and simple ways, and were always available outside of the classroom for help.” He also is thankful to Villanova for the opportunity to intern with Lockheed Martin for three years. After graduation he worked for the company full-time before attending NYU.

Of being selected as a Young Scholar, MacCartney says, “It’s been a humbling experience to be selected among my peers—to even be considered among them.  There are so many great young scientists in this group and society, and I will continually strive to prove that I deserve to be among them.”

Young Scholar candidates are nominated by their academic advisors. Winners are selected by an international panel comprised of engineers from leading universities and companies, and receive a $4000 prize plus expenses to attend the annual awards event.  Three other Young Scholars were selected this year and will receive their awards at the same event where Brad Parkinson, considered the “father of GPS,” will be honored with the $100,000 Marconi Prize.

About the Marconi Society

Established in 1974 by the daughter of Guglielmo Marconi, the Nobel Laureate who invented radio, the Marconi Society promotes awareness of key technology and policy issues in telecommunications and the Internet, and recognizes significant individual achievements through the Marconi Prize and Young Scholar Awards.