Journey of the Universe 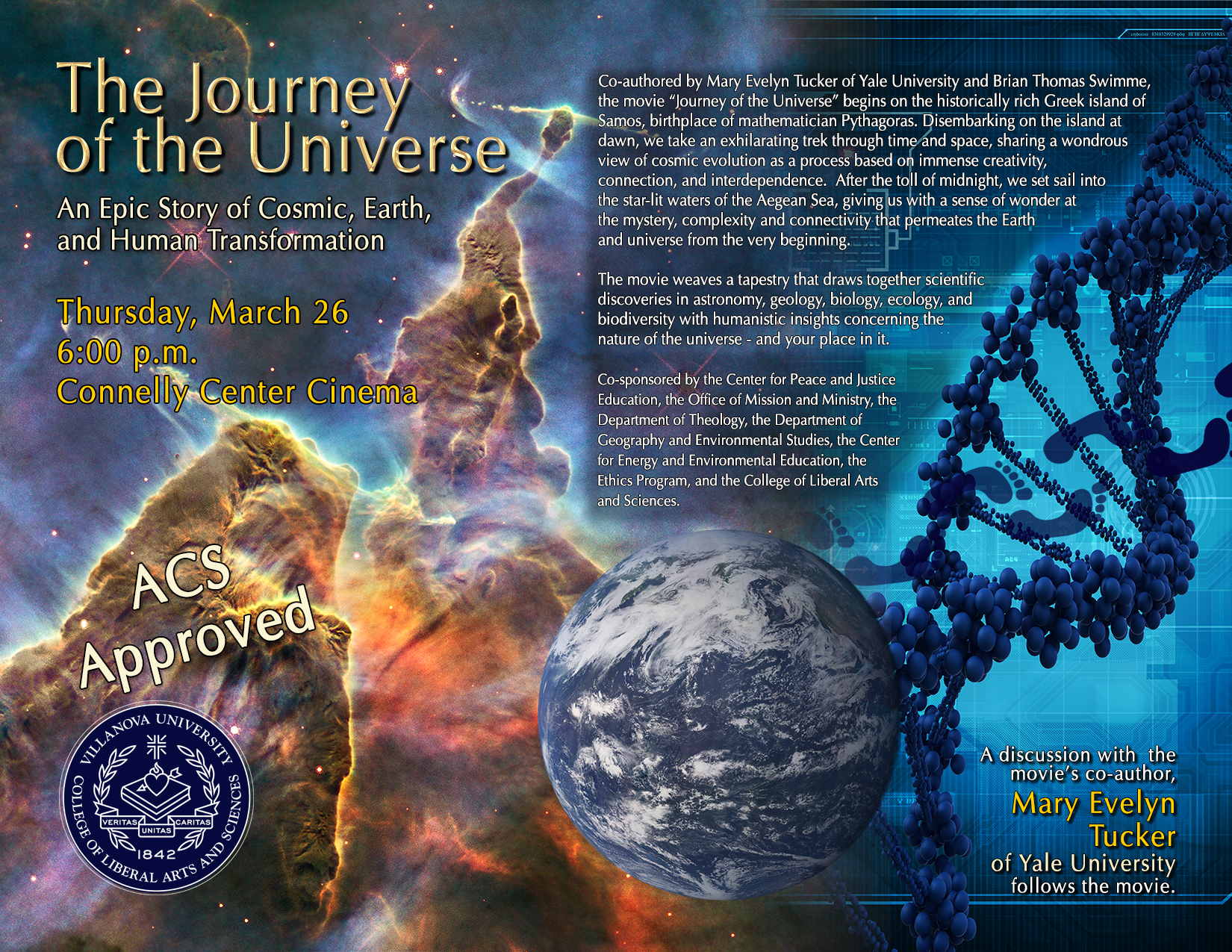 The Journey of the Universe

An Epic Story of Cosmic, Earth, and Human Transformation

Co-written by Mary Evelyn Tucker of Yale University and Brian Thomas Swimme, the movie “Journey of the Universe” begins on the historically rich Greek island of Samos, birthplace of mathematician Pythagoras. Disembarking on the island at dawn, we take an exhilarating trek through time and space, sharing a wondrous view of cosmic evolution as a process based on immense creativity, connection, and interdependence.  After the toll of midnight, we set sail into the star-lit waters of the Aegean Sea, giving us with a sense of wonder at the mystery, complexity and connectivity that permeates the Earth and universe from the very beginning.

The movie weaves a tapestry that draws together scientific discoveries in astronomy, geology, biology, ecology, and biodiversity with humanistic insights concerning the nature of the universe - and your place in it.

A discussion with the movie’s co-author, Mary Evelyn Tucker, follows the movie.

Information about the movie is here.

Chapple, C. K. and M. E. Tucker (2000). Hinduism and ecology: the intersection of earth, sky, and water. Cambridge, MA, Distributed by Harvard University Press for the Center for the Study of World Religions, Harvard Divinity School.

Matthews, C. N., et al. (2002). When worlds converge: what science and religion tell us about the story of the universe and our place in it. Chicago, Emeryville, CA, Open Court;

"Today we know what no previous generation knew: the history of the universe and of the unfolding of life on Earth. Through the astonishing combined achievements of natural scientists worldwide, we now have a detailed account of how galaxies and stars, planets and living organisms, human beings and human consciousness came to be. And yet . . . we thirst for answers to questions that have haunted humanity from the very beginning. What is our place in the 14-billion-year history of the universe? What roles do we play in Earth's history? How do we connect with the intricate web of life on Earth? In Journey of the Universe Brian Thomas Swimme and Mary Evelyn Tucker tell the epic story of the universe from an inspired new perspective, weaving the findings of modern science together with enduring wisdom found in the humanistic traditions of the West, China, India, and indigenous peoples. The authors explore cosmic evolution as a profoundly wondrous process based on creativity, connection, and interdependence, and they envision an unprecedented opportunity for the world's people to address the daunting ecological and social challenges of our times. Journey of the Universe transforms how we understand our origins and envision our future. Though a little book, it tells a big story one that inspires hope for a way in which Earth and its human civilizations could flourish together. This book is part of a larger project that includes a documentary film, an educational DVD series, and a website. The film and the DVD series will be released in 2011. For more information, please consult the website, journeyoftheuniverse.org"--

Tucker, M. E. (1985). The ecological spirituality of Teilhard. Chambersburg, PA, Published for the American Teilhard Association for the Future of Man, Inc. by Anima Books.

Tucker, M. E. and J. H. Berthrong (1998). Confucianism and ecology: the interrelation of heaven, earth, and humans. Cambridge, Mass., Distributed by Harvard University Press for the Harvard University Center for the Study of World Religions.