Dr. Stuver is a part of an international team of scientists that detected gravitational waves for the first time.  These gravitational waves are very small changes in gravity that are made when the most massive objects in the universe undergo violent events, like when two black holes or two neutron stars orbit into each other in a colossal collision.  Both black holes and neutron stars are the very dense "left overs" from the explosive deaths of extremely massive stars.  Neutron stars are so dense that one teaspoon would weigh 1 billion tons - that's equivalent to almost 300 Empire State Buildings!

The gravitational wave detector that Dr. Stuver works with is called LIGO (Laser Interferometer Gravitational-Wave Observatory) and first discovered black holes colliding from 1.3 billion light years away from the Earth.  Most recently, two neutron stars collided and were observed with gravitational waves and with the light the collision produced - it was observed by over 70 observatories around the world and orbiting the Earth.  Combining these observations has answered many questions, including how most of the gold in the universe is made.

Come and learn about the new discoveries being made with gravitational waves! 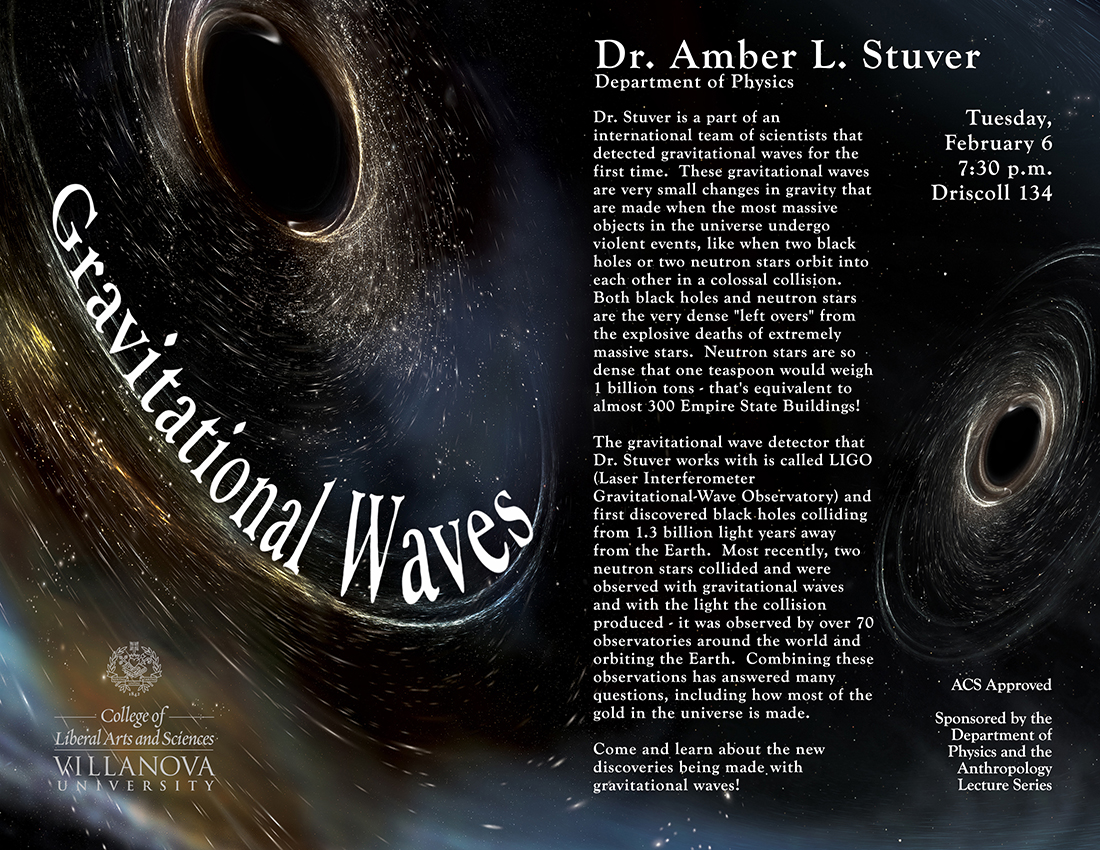 Dr. Stuver is part of a team that just recently found evidence for gravitational waves that were set off 1.3 billion years ago.  This confirmation of an idea that Einstein had a century ago is just the most recent example of how physicists have been determining how our universe works.

Physicists and astrophysicists for a long time have been revolutionizing how we humans see ourselves in relationship to the universe, space, and time.  It is remarkable how her group just heard this wave that began before there were humans, mammals, life on land, or our current continents.  She will tell us about what gravity is, how space is structured, how amazing neutron stars and black holes are, where gold comes from, and other great physics things.  But she will also be leaving us with the types of questions that every human culture - maybe every human - has asked when they look up to the skies:  What is all that up there, how do I fit into it, and who am I now as a result of what happened impossibly far away and long ago.

Her talk is also central to the purposes of our College of Arts and Sciences.  Amber's team's work has added new knowledge in the service of veritas, or truth as well as we can know it now.   Her willingness to share this across disciplinary boundaries is in the service of unitas, or the search for the unity of knowledge across disciplines in a universe of knowledge.  Her willingness to work long hours in the search for this new knowledge comes from her passion for her field of study; her willingness to share it with all of us in the college comes from her care about the entire community, or caritas.  Her presentation exemplifies Villanova's central values.