The Origin and Fate of the Universe

“How did the Universe begin?” is one of humanity’s oldest questions. Though the approach to this question has spanned many fields of study, the last century has provided the opportunity to apply the scientific method to this question with results that have established our modern understanding of the origin, content, and fate of the universe. Starting with the backbone of Albert Einstein's 1915 Theory of General Relativity and its once-surprising implication that we live in a universe that is expanding, the so-called “concordance model of cosmology” (the specific version of the “Big Bang” that describes our universe) has been developed through the ongoing interplay between advancements in our theoretical understanding and measurements returned by innovative new telescopes and techniques. Physical cosmology seeks to understand the content of the universe, its history, and its ultimate fate. On this front, much progress has been made. We understand that we live in a universe that has been expanding for the past 13.8 billion years. “Dark matter” and gravity work together to produce the observed galaxies and stars through which the elements necessary for life are forged from primordial hydrogen. The universe is dominated by “dark energy” that has recently accelerated the expansion.  For all of this progress, perhaps the most exciting aspects of physical are the new questions that have arisen that were not even possible to pose just decades ago. Future endeavors will study the nature of dark energy and dark matter and will explore the physics of the first fraction of a second of the universe.

Co-Sponsored by the 11th Annual Anthropology Lecture Series, the Department of Physics, and the College of Liberal Arts and Sciences. 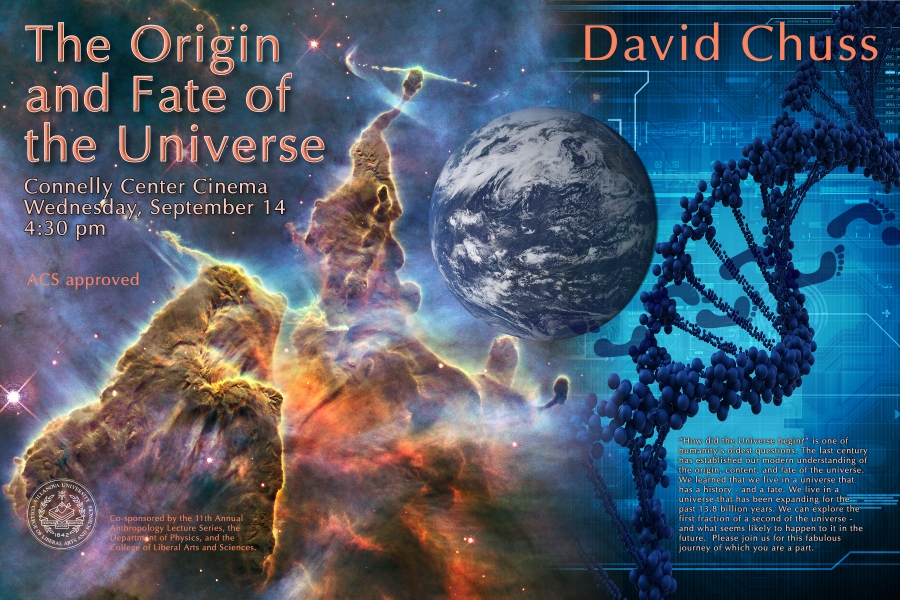