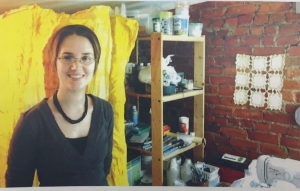 Melinda Steffy stands next to some of her artwork.

The Contemporary Art of Melinda Steffy Upcoming at Villanova Gallery

Villanova, PA –Contemporary artist Melinda Steffy draws inspiration for her art from many sources, a recent one being the curious behavior of some penguins depicted in a documentary about Antarctica.  In it, a flock of penguins is seen heading for the open water.  On the way, part of the group turns back toward their nesting ground.  Joining neither group, one lone bird chooses a third direction, waddling off toward distant mountains.

“I’m intrigued that these few birds set out on a solitary journey that goes against all penguin food, flock, and mating survival instincts,” says the Philadelphia artist, whose thematic installation, ‘Remnants and Residual Memories’, opened August 17, 2009 at the Villanova University Art Gallery.  “This anomaly fits with my ongoing interest in order versus chaos, structure against formlessness, while adding, at least seemingly, an element of free will.”

For her upcoming Villanova exhibit, the artist is creating what she calls “a ‘memory room’ of painting/textile/objects” through which she seeks “to metaphorically reclaim memories before they disappear.”  The work includes found objects, remnants, secondhand fabrics, family keepsakes, hand-made pigments, and house paints.

“I like the word ‘remnants’,” says Steffy.  “They’re fragments that you’re rescuing from a former life.  What they were used for in that previous life is somehow being carried through.  It’s not the end of the story.”

The exhibit is, in part, a look into the nature of her grandfather’s memory loss from Alzheimer’s disease.  “While there was distortion and fading of material memory, abstractions of life seemed to still be there for him.  He might not have specific memories, but he could recall the qualities of a person,” she notes.

More broadly, Steffy sees her Villanova installation as comprising “rhythmic visual compositions that address abstract questions about memory and its loss, particles and the void around them, structure and formlessness, purpose and accident.”

Normally a backdrop in traditional installations, the gallery walls play an integral role in Steffy’s exhibits.  “The most compelling installations cluster the artwork in groups and pay careful attention to the wall space between so that there is a feeling of breath and emptiness as well as connection and interrelation.  The pieces themselves are deliberately fragmentary, brief, to give the feeling of a nearly forgotten story or a fleeting line of music,” says the artist, for whom music plays a central role in her art and life.

The materials of which the objects are made are as integral to the art as the objects themselves.  “For me,” says Steffy, “untraditional or re-used materials carry with them meaning from their previous lives or original purposes, and so add conceptual complexity to artwork.”

She cites as an example the house paint in her work ‘Remark’.  Peeled from its surface, rather than attached to a wall, with a painstaking grid of unraveled canvas threads, the paint was cut into rough shapes and then loosely sewn together.  “All of the house paint I use is left over from other people’s renovation projects, so it carries a connotation of home life and transformation, rather than the blankness of commercial artist paints.”

To enhance the material meaning, Steffy makes her own dyes and pigments from plants, nuts, and spices, which often have medicinal properties or applications beyond their common uses.  The tediousness of the paint-making process, as with the stitching, sewing, papermaking, and other repetitive tasks, invests her even more deeply in her art.

“The repetition and the monotony, even though I may cringe at them, become ritual and rhythm.  They make me part of the meaning of my work and add elements of time and spirituality.”

Steffy received her Master of Fine Arts degree in painting in 2006 from the University of the Arts in Philadelphia and earned a bachelor’s degree in religious studies at Eastern Mennonite University in Harrisonburg, Virginia.  She has given bead-working classes for small business ventures in South Africa and studied Mayan back-strap loom weaving in Guatemala.  Her work has been exhibited at the Sam Quinn, Rosenwald-Wolf, F.U.E.L Collection, and Highwire Galleries in Philadelphia, William Paterson University, MicroMuseum, The Music School of Delaware, the Delaware Center for the Contemporary Arts, and the Lancaster Museum of Art.  Her mural, In Remembrance, hangs in the Tshwane Leadership Foundation in Pretoria, South Africa.

Selected works for Melinda Steffy’s Exhibit may be previewed on the gallery’s website at www.artgallery.villanova.edu.