'Ever Ancient, Ever New'- 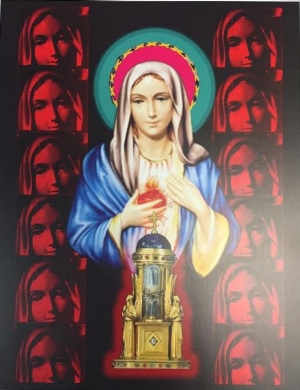 In media ranging from clay to photography, the exhibit offers a look into the centuries-old holy shrines stationed along the streets and alleyways of Southern Italy and Sicily, the birth region of the artist’s paternal grandfather.  Normally a classical iconographer – as well as an internationally noted watercolorist, fabric, and glass artist – Rev. Cannuli mergers these and more disciplines in his distinctive treatment of the roadside shrines and processional statues borne by worshippers in holy day observances.

“I think that I have stretched my iconic images as far as I can for now,” Rev. Cannuli says of his show.  In a preview for ICON magazine, reviewer Burton Wasserman writes:

“The artworks project a rare essence of mysticism. It is an exhibition that helps the artist connect with his audience while urging them to connect with each other, while seeking to respect the spirit and mystery of life,” Wasserman observes.  The exhibit is supported in part by Pennsylvania Partners in the Arts, the regional arts funding partnership of the Pennsylvania Council on the Arts.

For the serious practitioner, the art of iconography is a meditation.  For Rev. Cannuli the time-honored and very precise process of creating an image of Christ, the Holy Mother, or a Roman Catholic saint signifies the spiritual journey which he has been on for most of his life.

“Creative expression is a process which one touches spiritually and continually.  In creativity, we begin to know the Creator,” he notes.

Many year ago, the making of classical icons in the Russian tradition helped move Rev. Cannuli to re-evaluate his vocation as a brother in the Augustinian Order.  “In the process of reading the icons, looking, studying and understanding them, I came into communion with them.  This raised the question of my spirituality – where I was going, what I was doing.  That’s how I started to reconsider the fact that maybe I should move forward.” The direction he chose to move was to study for the priesthood, into which he was ordained in 1999.

As a religious artist, Rev. Cannuli’s interests are wide-ranging.  A certified liturgical design consultant, he has planned worship spaces for numerous religious communities.  His designs for stained glass windows, mosaics, sanctuary furniture, and liturgical vestments may be found in worship spaces in the United States and abroad.  He also lectures on iconography, art, and environment in liturgical space.  His watercolors and paintings in acrylics and oils have been exhibited in solo and group shows around the world.

In recent years, maintaining his creative momentum has been challenged by his increasing administrative responsibilities at Villanova.  Founder and director of the art gallery, as well as full professor in studio art, Rev. Cannuli now also chairs the university’s theatre, studio art, and music programs.  His pursuit of art now takes place more in the wee hours.

“I have all this backed up creativity.  To get to the next level, I have to get it out.  To do that, I steal whatever time I can,” he says.

The exhibit comprises large wall hangings, more than a dozen three-dimensional floor pieces, as well as traditional icons in gold leaf and tempura.  Getting the work done required calling in some help.  So Rev. Cannuli formed a group of volunteer assistants in the manner of a Renaissance apprentice workshop.

One daunting task was to winnow from 4,000 down to 40 of the photos he had taken of Italian roadside and processional shrines, and then to electronically manipulate the surviving images to achieve the effects he sought.  A fellow art instructor edited the photos and forged the imagery.  Five art students sanded, smoothed, painted, and waxed frames, applied undercoating and gold leaf to surfaces, and did other prep work.

Rev. Cannuli paraphrases a favored quote by Jasper Johns, a contemporary iconographer of a different kind: “When I go to my work, I’m always moving up, always taking it to the next level.”

The artist earned his Master of Fine Arts (MFA) degree at Pratt Institute in Brooklyn, NY, his BFA at Villanova, and advanced studies at the Pennsylvania Academy of Fine Arts.