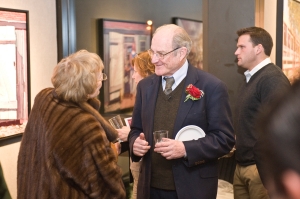 Villanova, PA –A hundred years from now, a reviewer once wrote, anyone wanting a truthful depiction of middle-class suburban life in America in the late 20th and early 21st centuries would do well to study the paintings of Mel Leipzig.  In the art world, the amiable artist is known as "a ruthless realist...with an omnivorous appetite to render what he sees in front of him."

What the eminent Trenton, New Jersey artist invariably sees in front of him -- and captures with acrylics on his rich, intricately-detailed canvasses -- are men, women, and children in the "profusion of messy detail" of their daily lives.  The people in Leipzig's paintings are teachers, architects, and artists in the detritus of their work settings; teenagers in a bedroom lair surrounded by comments and illustrations of their disaffection; parents and their children poised over the remains of dinner; families in their backyards and at the beach; robed churchmen posing in their places of worship.

Leipzig's work of the past three years, most of which remains unseen, will be unveiled in a free, public exhibit at the Villanova University Art Gallery beginning January 9, 2009.  The artist is dedicating the solo show, "Recent Paintings," to Mary Jo, his late wife of some 40 years.  The show will continue to February 19.

For many, Leipzig's work evokes that of Edward Hopper.  Indeed, Leipzig acknowledges the famed painter of city life during the Great Depression era as an important influence.  Hopper's drama, however, writes a student of both artists, "lies in leaving things out and Leipzig's for painstakingly putting them in."

Also, Hopper's setting was the city, Leipzig's the outer loop.  And while Hopper's characters seemed terribly alone and empty, a reviewer sees "a purposeful air" in the denizens of Leipzig's renderings, although some observers detect an undercurrent of melancholy hinting at the unfulfilled life.

As is often the case, critics read more into an artist's work than the artist consciously intends, and drama, says Leipzig, is not his intention: "I don't like glamorizing at all.  All I strive to do is capture people in their ordinary pursuits."  He does so with a sparse palette of just four colors -- dark red, cobalt blue, yellow, and white -- from which come his myrid hues, tints, and shadings.

As to drama, the artist may be more in accord with Gerard Haggerty's review in ARTnews of his 2006 exhibit in New York.  Calling Leipzig's style "purposefully flat-footed" and his technique "not flashy", Haggerty wrote that the exhibit, "reflected a simple truth: we define ourselves by the environments we create."  In fact, Leipzig calls his large-scale canvasses "environmental portraits."

The artist hopes viewers of his work at Villanova "will feel they're in the paintings, that they're participating in them."  The size of his canvasses (some six feet wide), and their remarkably rich detail and realism, abet the possibility of personal encounter.  The illusion of standing within Leipzig's work is further enhanced by Leipzig's use of the over-arching curved line.

Now in his mid-70's, Leipzig continues to be prolific.  His refusal to work from photographs because it "would dilute the intensity of feeling that I am seeking," precludes working from the comfort of a studio.  So he heads out regularly in his white van crisscrossing the New Jersey midlands to keep his in situ painting appointments.

Until the mid-90's, the subjects of his paintings were family, friends, students, and colleagues at nearby Mercer County Community College, where he is a long-time and honored art professor.  His Villanova exhibit will include artists in their home and work environments, the Jersey City Museum, a health club, an architect's office, and Trenton religious leaders in their milieus.  Family continues to be represented.

Leipzig makes a point of noting that unless he's doing a commission painting, he pays those who model for him, as well as for the use of their workspace.  He doesn't tell his subjects what to wear or how to pose, although he does, from time to time, have to direct them to stand or sit still for a spell.

Leipzig's awards include a Fulbright Grant to Paris, a Louis Comfort Tiffany Award, and several painting grants from the New Jersey Council on the Arts.  In 1996, he was one of the last individual artists to receive a grant in painting from the National Endowment for the Arts.

Though his educational credentials are impressive -- Copper Union, Yale, and Pratt -- Leipzig considers himself to be a self-taugh portrait painter.  "I always wanted to paint figures, but objective painting was not in vogue when I was getting my education.  At Cooper Union, all of my teachers taught non-objective courses.

"I like abstract expressionism now, but then I didn't even know what it was," he says.  He has since melded abstract qualities into his work.  His message to art students: "Don't become a painter unless you paint what you want."

Leipzig's paintings may be seen in the Whitney Museum, the National Endowment for the Arts Gallery, the White House Collection in Washington, D.C., the Yale Art Gallery in New Haven, CT., the New Jersey State Museum, and the Cooper-Hewitt Museum in New York City, among many others.

The artist earned his MFS at Pratt Institute in Brooklyn, NY, his BFA at Yale University's School of Art and Architecture, and a three-year certificate at Cooper Union.