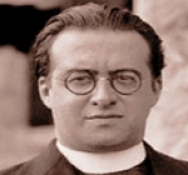 Abbe Georges Lemaitre, Ph.D. Dr.Sc., Priest, Scientist, Author, and Originator of the theory of the expanding universe. Born in Charleori, Belgium 1894, he has become one of the youngest scientists that has ever made an important contribution in explanation of astro-physical phenomena.

Professor Albert Einstein termed his theory of the expanding universe "the most satisfactory yet presented," and recommended him for the Francqui prize, given by the Belgian Government to one of its citizens who has aided greatly in carrying forth the prestige of the Belgian Nation in the realm of discovery and research. Lemaitre was awarded the prize on May 14, 1932.