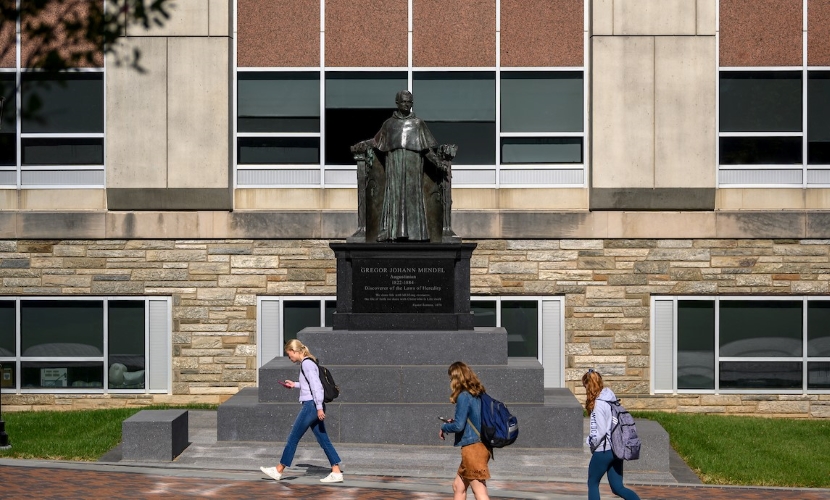 As an Augustinian institution of higher education, Villanova University is one of the custodians of Gregor Mendel’s legacy. The accomplishments of this 19th century Augustinian friar, teacher, scientist, and mathematician have helped shape the world’s collective understanding of genes, crossbreeding, and heredity. He is the namesake of the state-of-the-art Mendel Science Center on campus where his legacy is celebrated daily by students who study there. His work remains a vital part of contemporary study of the natural and physical sciences at the University. Indeed, the scientific, moral, and ethical ramifications of Mendel’s discovery continue through the discoveries of the DNA double helix by Watson and Crick and the Human Genome Project, which was completed in 2003 and successfully identified all the genes that make up human DNA.

The Rise of Lysenkoism

The 1950s marked the rise of “Lysenkoism,” which was an assault on the work of Mendel. Named after the Soviet agricultural minister Trofim Lysenko, Lysenkoism held that science was to be guided by ideology, not by the most likely theories, which were backed by appropriately controlled experiments. It propounded the idea that all living things, including humans, when given the proper environment, could be turned into whatever society needed them to become, irrespective of their genetic limitations. Science was to be in the service of the state, that is, in the service of Communist ideology. When Lysenkoism became official Soviet policy, many Russian and eastern bloc scientists who held to Mendelian genetics were either forced to recant their errors or be dismissed from their positions. Those who didn’t were sent to the gulags or simply disappeared. Mendel, too, in the symbol of his statue, was removed from his prominent position in Mendelplatz and relegated to the gulag of a remote corner of St. Thomas monastery. It was only when Lysenkoism was discredited after the fall of Khrushchev in 1964 that scientists were able to convince the Communist government to move the statue to a more prominent place in one of the monastery’s courtyards, where it remains today.

A Custodian of the Mendelian Legacy

Villanova University is also home to Mendel’s paper, “Versuche über Pflanzen-Hybriden” (Experiments in Plant Hybridization) published in the 1866 Proceedings of the Natural History Society of Brünn. This historic document was presented to Falvey Memorial Library by the Augustinians of the Province of Saint Thomas of Villanova in 1999. It is the cornerstone of the Mendeliana Collection and as such has been digitized for inclusion in the Villanova Digital Library.

Also in the Villanova collection is a microscope believed to have been used by Mendel, from the Vienna workshop belonging to Simon Plössl (1794-1868). It is 10.25 inches high and on its base is the signature, Plössl in Wein, (Plössl in Vienna). The Plössl microscope was discovered in the Villanova Collection, although it is not known when or how it found its way to the University. Plössl instruments are uncommon in the United States collections and not often found in European collections outside the German-language areas. Based upon the design features and style, circa 1860 is suggested as the date for this microscope. Because of its origin and date of manufacture, it is believed that Mendel might have used this microscope.

The Establishment of the Mendel Medal

Finally, and most importantly, Villanova University established in 1928 the Mendel Medal Award to recognize the scientific accomplishments and religious conviction of outstanding scientists. The Mendel Medal was first awarded in 1929 and given annually until 1943. Between 1946 and 1968, the Medal was awarded eight times. Unfortunately, after 1968, a twenty-five year hiatus ensued until the Mendel Medal was reestablished in 1993 to confirm its original purpose of honoring the achievements and memory of Gregor Mendel as well as the work of an outstanding contemporary scientist.

Fr. Joseph Dougherty (1896-1955), dean of the science division of the College and a Ph.D. in biology, was instrumental in the establishment of the Mendel Medal. An authority on the Mendelian laws of heredity, Fr. Dougherty lectured widely on Mendelian theories, and worked tirelessly to build the College’s pre-medical program. In 1929, he was involved in renaming the rebuilt College Hall, the main administrative and classroom building which had been destroyed by fire, as Mendel Hall (now Tolentine Hall). It remained the major science building on campus until the Mendel Science Center was constructed in 1960.

The University archives contain a letter from Fr. Dougherty to Mr. Jennings Hood, a Philadelphia jeweler, about engaging a sculptor to design the Medal. In regard to the College undertaking the project during a period of hardship, Fr. Dougherty wrote:

…Villanova has absolutely no endowment except the lives of the men who have consecrated themselves to Catholic education in the Augustinian Order; moreover, at the present time we are laboring under serious financial difficulties incident to our disastrous fire of last year…I wish you would begin working up this medal as soon as possible.

It is important to note that the Mendel Medal was inaugurated in a time of social ferment, during which some religious people perceived Darwin’s theory of evolution as undermining traditional values. In stipulating that the Mendel Medal was to be awarded to "outstanding scientists who have…given practical demonstration of the fact that between true science and true religion there is no real conflict," Villanova affirmed and continues to affirm the sacred connections between science and religion, using as its emblem the great Augustinian scientist Fr. Gregor Mendel.

The sculpture of Gregor Mendel on Villanova’s campus is the work of James Peniston of Philadelphia, PA.  Commissioned in 1998, it was inspired by the original Mendel monument in Brno, (in the present day Czech Republic).

The original Mendel memorial was commissioned by the Brno Natural Science Society in 1906, with funds raised from an appeal that found support from many scientists abroad. Five sculptors were asked to submit ideas for the sculpture and Theodore Charlemont was selected for his design that portrayed Mendel clothed in an Augustinian habit surrounded by pea plants climbing a garden wall.

The statue was officially unveiled on October 2, 1910 in the square before St. Thomas Monastery, which was renamed Mendel Square. Representatives from the Brno municipality, government officials from Vienna, and thousands of ordinary citizens were in attendance. Among the prominent scientists present were Professor Eric Von Tschermack, from Vienna, the “third” rediscoverer of Mendel’s work and Professor William Bateson from Great Britain, the first to translate Mendel’s major work into English who, in 1910 became Britain’s first professor of genetics and introduced the term genetics.  Several other prominent scientists from France, Holland, Sweden and Germany were also present.