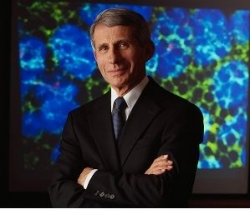 Anthony S. Fauci, MD, preeminent immunologist, pioneering HIV/AIDS researcher and Director of the National Institute of Allergy and Infectious Diseases (NIAID) at the National Institutes of Health (NIH), has been named as the recipient of Villanova University's 2016 Mendel Medal. The award recognizes Dr. Fauci’s significant contribution to the body of scientific knowledge in preventing, diagnosing and treating infectious diseases such as HIV/AIDS, influenza, malaria, tuberculosis, Ebola and the Zika virus, as well as for his lifelong dedication to global health.  Established in 1928 by the Board of Trustees of Villanova University, the Mendel Medal is given to outstanding contemporary scientists in recognition of their accomplishments.

“Villanova is honored to award the Mendel Award to this esteemed scientist,” said the Rev. Kail Ellis, PhD, OSA, Special Assistant to the President and Dean Emeritus of the College of Liberal Arts and Sciences. “I am particularly pleased that faculty, and especially students, will have an opportunity to hear Dr. Anthony Fauci in person, as he lectures on his research and contributions to the current understanding of diseases and therapies for such fatal diseases as HIV/AIDS, Ebola and Zika virus.”

Dr. Fauci is currently at the vanguard of the nation’s public health preparations to meet the threat of the Zika virus.  As Director of the NIAID, he oversees an extensive portfolio of basic and applied research to prevent, diagnose, and treat established infectious diseases, such as HIV/AIDS, respiratory infections, diarrheal diseases, tuberculosis and malaria as well as emerging diseases such as Ebola and Zika.  Dr. Fauci has advised five Presidents and the U.S. Department of Health and Human Services on HIV/AIDS and many other domestic and global health issues. He was one of the principal architects of the President’s Emergency Plan for AIDS Relief (PEPFAR), a program that has saved millions of lives throughout the developing world.

“Not since the 1918 influenza pandemic, which killed as many as 50 million people around the globe and is considered one of history’s most deadly contagions, has the world been faced with the threat posed by such an array of devastating epidemics,” said Father Ellis. “Humankind is indebted to Dr. Fauci for decades of dedicated work that is helping to make the widespread transmission of these diseases less likely.”

First awarded in 1929, the Mendel Medal honors 19th century Augustinian friar and scientist Gregor Johann Mendel, Abbot of the Augustinian Monastery, Brünn, Austria (now Brno, the Czech Republic), best known as “the father of modern genetics,” for his discovery of the celebrated laws of heredity that bear his name. As an institution founded by the Augustinian Order, Villanova University plays a key role in sustaining Mendel’s legacy. Past recipients of the Mendel Medal have included Nobel Laureates, outstanding medical researchers, pioneers in physics, astrophysics and chemistry, and noted scientist-theologians.

“The Mendel Medal is a symbol of the reality that there is no conflict between science and religion,” continued Father Ellis. “The idea that there is a necessary conflict between science and religion is contradicted whenever we see a prominent religious believer who also strongly embraces scientific realities. History is replete with such individuals: Copernicus, Galileo, Descartes, Pasteur, Blaise Pascal, Georges Lemaitre, and Gregor Mendel, among many others. Pope Francis’s recent encyclical Laudato Si disputed the notion of ‘necessary conflict’ and previously, in a talk to the Pontifical Academy of Sciences, he endorsed two major scientific concepts that have often given religious believers big trouble: the Big Bang, and evolution. Villanova’s Mendel Medal celebrates the Augustinian commitment to the harmony of science and faith.”

In addition to his role at NIH, Dr. Fauci is also the long-time chief of the Laboratory of Immunoregulation, where he has been a pioneer in helping develop effective therapies for formerly fatal inflammatory and immune-mediated diseases. In addition, he has made groundbreaking contributions to the understanding of how HIV destroys the body’s defenses leading to its susceptibility to deadly infections and has been instrumental in developing treatments that enable people with HIV to live long and active lives. He continues to devote much of his research in this area of endeavor. In a 2016 analysis of Google Scholar citations, Dr. Fauci ranked as the 18th most highly cited researcher of all time.

Dr. Fauci has delivered major lectures all over the world and is the recipient of numerous prestigious awards, including the Presidential Medal of Freedom (the highest honor given to a civilian by the President of the United States), the National Medal of Science, the George M. Kober Medal of the Association of American Physicians, the Mary Woodard Lasker Award for Public Service, the Albany Medical Center Prize in Medicine and Biomedical Research, the Robert Koch Gold Medal, the Prince Mahidol Award, and the Canada Gairdner Global Health Award.  He also has received 43 honorary doctoral degrees from universities in the United States and abroad.

Dr. Fauci is a member of the National Academy of Sciences, the American Academy of Arts and Sciences, the Institute of Medicine, and the American Philosophical Society, as well as other professional societies, including the American College of Physicians, The American Society for Clinical Investigation, the Association of American Physicians, the Infectious Diseases Society of America, The American Association of Immunologists, and the American Academy of Allergy, Asthma & Immunology. He serves on the editorial boards of many scientific journals; as an editor of Harrison's Principles of Internal Medicine; and as author, coauthor, or editor of more than 1,280 scientific publications, including several textbooks.​

The 2016 Mendel Medal Lecture will take place at 2 p.m. on November 11, 2016 in the Jake Nevin Field House. Dr. Fauci’s Mendel Medal Lecture is titled: “Ending the HIV/AIDS Pandemic: An Achievable Goal.” The event is free and open to the public. Parking will be available behind the Pavilion and at the St. Augustine Center parking garage on campus.

90th Anniversary of the Mendal Medal