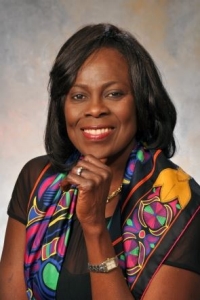 Olufunmilayo I. Olopade, MD, FACP, OON, an internationally renowned pioneer in cancer genetics, has been named as the recipient of Villanova Unviersity’s 2017 Mendel Medal. Dr. Olopade serves as the Walter L. Palmer Distinguished Service Professor of Medicine and Human Genetics and Director of the Center for Clinical Cancer Genetics at The University of Chicago. The award recognizes her work in developing innovative strategies for comprehensive cancer risk assessment and prevention based on evolving understanding of genetic and non-genetic factors in individual patients, with a focus on women of African ancestry. Established in 1928 by the Board of Trustees of Villanova University, the Mendel Medal is given to outstanding contemporary scientists in recognition of their accomplishments.

“The Mendel Medal selection committee was very impressed with Dr. Olopade’s work in breast cancer genetics, especially on the impact of BRCA1 and BRCA2 mutations in young women across the African diaspora,” said the Rev. Kail Ellis, PhD, OSA, Special Assistant to the President and Dean Emeritus of the College of Liberal Arts and Sciences. “Her research in the incidence of breast cancer among minority populations as well as disparities in health outcomes, are particularly in accord with the criteria for the award of the Mendel Medal.”

The Mendel Medal is conferred on “outstanding scientists who have done much by their painstaking work to advance the cause of science and, by their lives and their standing before the world as scientists, have demonstrated that between true science and true religion there is no intrinsic conflict.”

Using high intensity genomic technologies and bioinformatics, Dr. Olopade’s laboratory research focuses on molecular mechanisms of cancer through genetic and non-genetic factors that contribute to tumor progression in at-risk individuals and diverse populations. The overall goal of her research is to accelerate progress in cancer prevention and treatment.

“Dr. Olopade’s mission as a medical researcher and medical professional, to, in her words, seek ‘genetic justice‘ for women and their families around the world, . . . by challenging existing paradigms in how breast cancer is detected, diagnosed and treated’ is truly an inspiration,” said Father Ellis. “Her resolve to discover why the most aggressive forms of breast cancer strike young women of African ancestry is unflinching.”

In 2005, Dr. Olopade authored a pioneering study that found significant differences between breast cancers in Caucasian women and in women of African descent. She has published widely in medical and scientific journals. Dr. Olopade is an elected member of several honor societies, including the National Academy of Medicine, the American Academy of Arts and Sciences, and the American Philosophical Society. She has received numerous honors and awards, including honorary degrees from Bowdoin University and Princeton University; MacArthur Foundation Fellowship; Doris Duke Distinguished Clinical Scientist and Exceptional Mentor Award; American Cancer Society Clinical Research Professorship; Officer of the Order of the Nigeria Award; and the Franklin D. Roosevelt Freedom from Want Award. Dr. Olopade has served on the Board of Directors for the National Cancer Advisory Board and the American Board of Internal Medicine. Currently she serves on the Board of Directors for the Susan G. Komen for the Cure, Lyric Opera of Chicago and the MacArthur Foundation.

First awarded in 1929, Villanova’s Mendel Medal honors 19th century Augustinian friar and scientist Gregor Johann Mendel, Abbot of the Augustinian Monastery, Brünn, Austria (now Brno, the Czech Republic), best known as “the father of modern genetics,” for his discovery of the celebrated laws of heredity that bear his name. As an institution founded by the Augustinian Order, Villanova University plays a key role in sustaining Mendel’s legacy. Past recipients of the Mendel Medal have included Nobel Laureates, outstanding medical researchers, pioneers in physics, astrophysics and chemistry, and noted scientist-theologians. Click here for more information on the Mendel Medal and its history.

The Mendel Medal Lecture will take place at 2:30 p.m. on Friday, November 17, 2017 in the Villanova Room at the University’s Connelly Center. Dr. Olopade’s Mendel Medal Lecture is titled: “Genomic Landscape of Breast Cancer in Diverse Populations” The event is free and open to the public. Parking will be available on campus at the I-1 Ithan Avenue Parking Garage.

90th Anniversary of the Mendal Medal