Design of the Medal

The Villanova University Mendel Medal was designed and sculpted by Mr. John Sinnock in 1929. He was the chief engraver of the U.S. Mint for many years. In this capacity, he also designed the Roosevelt dime, the current Purple Heart, and the Franklin half dollar. In addition, he designed and sculpted many other official commemorative medals such as the Congressional medal awarded to Thomas A. Edison.

The obverse side of the medal depicts Mendel, clothed in the Augustinian habit, examining intently a sweet pea plant. At one side appears a microcope as it was developed in Mendel's time. The reverse side depicts an adaptation of the University's seal encircled by a wreath of sweet peas. 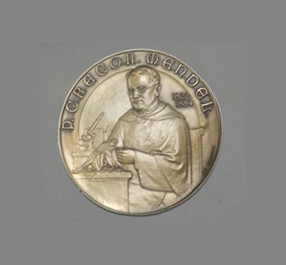 The obverse side of the medal designed and sculpted by John R. Sinnock is Gregor Johann Mendel, O.S.A. (1822-1884), clothed in the Augustinian habit and examining a sweet-pea. At one side appears a microscope as it looked in Mendel's time. Courtesy of Villanova University Archives. 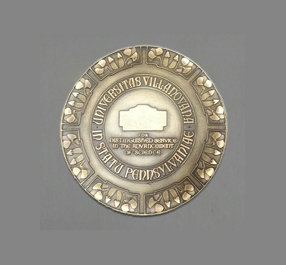 The reverse side of the Mendel Medal depicts an adaptation of the Villanova University's seal encircled by a wreath of sweet-peas with the inscription: For Distinguished Service in the Advancement of Science. Courtesy of Villanova University Archives.