A Passion for Color 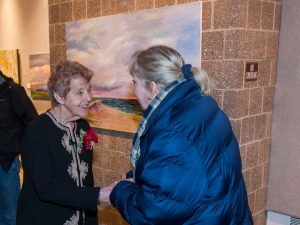 Villanova, PA – Its title, 'Passion for Color' tells a lot about the solo exhibit of impressionistic landscapes by noted painter Irma Shapiro opening at the Villanova University Art Gallery on January 9. What it doesn't tell is the Bala Cynwyd artist's penchant for exaggeration and embellishment of her subjects. Reality isn't her shtick.

“I am a colorist; color is what differentiates my work,” says the 79-year-old painter, who will turn 80 during the course of her Villanova show (on February 16). More than color sets Shapiro's work apart, says Bill Greenwood, noted artist, teacher and artist mentor. He advises viewers of her work to “look as well for the richness of her brushwork as applied to nature and the overall orchestration of her canvasses.”

Shapiro's free public exhibit continues from January 9 to February 19. An artist's reception will take place on Friday, January 16, from 5 to 7 pm in the Art Gallery located in the Connelly Center on the Villanova campus. Refreshments will be served. Convenient, on-campus parking is available.

In a big way, her Villanova exhibit is a new beginning for Shapiro, who lost a large body of her work in a fire that destroyed her home on an April night in 2012 while she was in a Bill Greenwood art class. The fire, she says, “took my art, my dog, my house, my everything”,  having to fill the gallery's 12 hanging walls in two-and-a-half years (she accepted the invitation to exhibit prior to the fire) was a tall order for an artist who has a compulsive habit of reworking her canvasses.

Meeting the deadline, she says, has meant “working non-stop, putting in five days a week”. To cut down on the odds of completing the work, she chose large canvasses, some 40 by 60 inches, and taking longer brush strokes with big brushes. She chose to limit her subject matter primarily to landscapes, although her range encompasses waterscapes, abstracts, still lifes, flowers and portraiture.

With the fast-drying acrylics, she can paint in a rush. She starts her work with neither plan nor preconceived notion of the outcome. A typical painting undergoes significant change before meeting her approval, with the finished work bearing scant or no resemblance to the scene that inspired it.

“I can't draw, I work frantically and I don't think things out. I paint my images back to front, so I'm up a creek if a sky needs redoing,” says the artist. And she does a lot of redoing. She is pleased, she says, with the work she has accomplished for her Villanova exhibit.

Her creative process also includes inviting and weighing criticism from fellow art students, artists, teachers and others whose opinions she respects. She has a caveat: “I have to feel good about who I'm asking to critique my work.” She calls Bill Greenwood “a fantastic 'critiquer'.”

She remembers years ago a teacher at a prominent Philadelphia art school telling her that the left side of a painting she was working on was good, but that the right side was lacking. A week later a new teacher told her exactly the opposite. While she has taken many classes over the years at some of the Philadelphia area's most prestigious art schools, she considers herself to be a self-taught painter.

There have been many ups, downs, and droughts during her life as an artist, which began when she took her first art class as a senior in college, where she was studying to be a teacher. She loved doing the art. “I felt so good about myself and I thought my work was wonderful.”

She became the elementary school teacher she had planned to be, married and took art classes at night. At the time, her favorite medium was oil paints, her applicator of choice the palette knife.

Though her art took a back seat to her marriage and her family, which would ultimately grow to five children, she still managed to squeeze in a painting here and there, and exhibit her work, mostly in group shows. She also worked in her physician husband's office. The squeeze on her art became tighter with the coming of her fifth child while in her 30s.

The passing of her mother caused her to stop painting altogether for a long time. Her mother had always encouraged her, not only with her staunch support, but also in the judgment of her work. “I knew when my work was good because she loved it. I decided I couldn't paint any more. I folded my easel and didn't paint for 20 years.”

Before his death in 1996, her husband expressed his hope that she would return to her art.  When she did pick it up again, she found her work out of vogue. “I was told to get rid of the knife; no one was painting with palette knives anymore.” Not entirely convinced, she gathered together some of her existing work, called around, and got The Art Works gallery in Kennett Square, PA, to offer them for sale. The upshot: 16 of them sold. “All of a sudden, what I had been doing was hot stuff.”

It didn't last: “The trouble was I hadn't kept up". I had forgotten what I needed to do. My new work with the knife was terrible.”

Back to class, where she discovered the comfort and expediency of working with fast-drying acrylics. Redoing her canvasses became much faster than with oils. She took afternoon classes at the Philadelphia Museum of Art, attended seminars, and met Bill Greenwood. She was still testing her prowess in her new medium when Greenwood told her that if she could get up 20 paintings – she was doing a lot of still lifes and flowers at the time – he'd get her a show. She did and he kept his word.

“Irma is one of the most prolific students I have ever had,” says Greenwood. “She's very dedicated to her work and has the energy of a 65-year old.”

Frequently preferring to paint in the company of others – senior centers are one venue – than in the solitude of her home meant acquiring a roomy van to lug around her large canvasses and attendant supplies. “What's a babe your age doing tooling around in a rig like this,” has been said to her by more than one old guy.

Because they were consumed in her home fire, her resume is sparse on the awards and honors her art had won over the years. “Every now and then,” she says, “I'll remember one.” Her list of solo shows, and participation in group, juried and invitational exhibits shows galleries, art centers, art associations and guilds, coffee houses and other venues across the Delaware Valley, as well as in New York, New Jersey and Florida.

She has taken art classes at Tyler School of Art, the Pennsylvania Academy of Fine Arts, the Philadelphia Museum of Art, Samuel Fleisher Art Gallery, Moore College of Art and the Main Line Art Center.

Her resume also lists the names of her mentors, a rarity in an artist's précis. In addition to Bill Greenwood, are: painter, printmaker and educator Sol Carson; artist/teacher Jim Leuders, the late Martin Jackson, noted nightscape and urban landscape artist; the late Samuel Fried, artist and teacher at the Pennsylvania Art Institute and Fleisher Museum; and the late narrative sculptor and painter Laura Goodman.

The Villanova University Art Gallery is open weekdays from 9 am into most evenings. For extended and weekend hours, and other information, telephone the Art Gallery at (610) 519-4612. Selected works for the Irma Shapiro exhibit may be previewed on the gallery’s website at www.artgallery.villanova.edu.