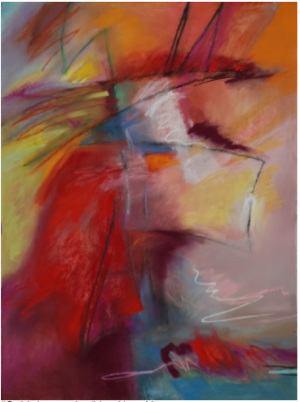 Neas' exhibit brings her back to her roots in Philadelphia, where her works were widely exhibited and she had a long, distinguished career as an innovating educator in a remarkable range of arts and crafts which she taught to students of all ages and walks.

In her work, in all of its shapes and forms, Neas strives for balance.  “The best art for me has always been an equally weighted art of emotion, or feeling, and art of the intellect although, sometimes, one or the other becomes dominant.  I am consciously exploring yin/yang concepts, such as the hidden versus the obvious, bold versus delicate, order against chaos, poetry versus fact.”

She earned a Bachelor of Fine Arts degree from Moore College of Art and a Masters in Fine Art from Temple University's Tyler School of Art.  Then followed a long career as a Philadelphia public school art teacher, the demands of which helped broaden her arts and crafts repertoire:

“As the result of my teaching assignments, I had to explore many facets of art beyond drawing and painting.  Crafts were big during the '70s, and I responded by doing ceramic art, hooked rugs, weavings, macramé, embroideries, and jewelry, all of which I also taught.”

During her 18-year tenure at Philadelphia's George Washington Carver High School of Science and Engineering, she developed groundbreaking curricula that expanded art's boundaries.  A course she drafted entitled 'Art Through Architecture' became a requirement for sophomores.  Many architects visited her classes and presented lessons.  Some of her art students went on to become architects.

In 1963, Neas married Leonard Nelson, her former teacher at Moore College of Art and a leading painter in the American abstractionist movement of the 1940s and '50s.  During the couple's 30-year marriage, Nelson, who died at 81 in 1993, went on to establish himself as Philadelphia's pre-eminent colorist.  Neas' resume shows a long list of exhibits dating from 1959 and several fine art awards.

Neas fondly remembers a time in Florence, Italy, when hosting Moore College of Art students on their foreign studies left the Nelsons time to relax and take in the incomparable artistic riches of the birthplace of the Renaissance.  A class they took with a master lithography printer at il Bisonte came with a pleasant surprise: “I produced two lithographs, as did Leonard, along with Pablo Picasso and Henry Moore.  All in all, a great experience.”

It was, Neas says, the wide open spaces and healthy air that prompted her move to Santa Fe five years ago.  Once settled, she quickly became part of Santa Fe's very vibrant art scene.  Her work is included in area collections and presented in galleries.

For hours, and other information, telephone the Villanova University Art Gallery at (610) 519-4612.  Selected works for the Alma Neas exhibit may be previewed on the gallery’s website at www.artgallery.villanova.edu.

"Life is Messy" by Alma Neas