The Zen Photography of Thomas Merton: A Hidden Wholeness 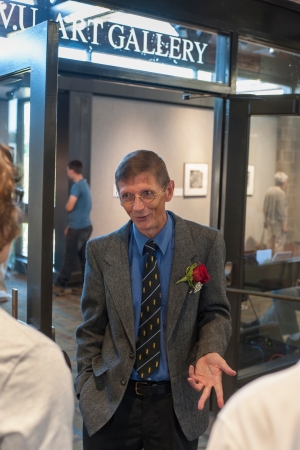 His Holiness the Dalai Lama said that Trappist Priest Thomas Merton (1915-1968) understood Buddhism better than any other Christian he had ever known.  Merton's immersion in Zen Buddhism as part of his quest to build world interfaith understanding extended to photography.

A sampling of his camera work is offered in “The Zen Photography of Thomas Merton: A Hidden Wholeness” opening August 20 in the Art Gallery in the Connelly Center. A free public reception formally opening the exhibit will take place on Friday, August 28, from 5 to 7 pm. Refreshments will be served.  Free on-campus parking is available.

The exhibit and other campus activities join a year-long world-wide observance of the 100th anniversary of the birth of the scholar, poet, essayist, mystic, artist, contemplative, and social activist seen by many as the 20th century's most influential Catholic writer and champion of world ecumenism.

Immediately following the Art Gallery reception, a talk on Merton will be given by Dr. Paul Pearson, director of the Thomas Merton Center at Bellarmine University in Louisville, KY.   At the Abby of Gethsemane near Louisville, on December 10, 1941, Merton ended a raucous youth by entering the Order of the Strict Observance (the Trappists), the most ascetic of Roman Catholic monastic orders.

The 35 black and white photos that constitute the Merton exhibit bear titles such as 'Trees', 'Solitary Tree on Hillside', 'Basket', 'Basket (Detail)', 'Window', 'Window Frame', 'Barn Doors and Weeds' and 'Ladder and Chair'.

As a Zen photographer, Merton captured in his lens the everyday and ordinary.  He used no special lenses, did no staging, or set his camera to capture dramatic angles.

““His images are without artifice or disguise,” writes Merton biographer Deba Patnaik.  “Almost all are frontal shots – direct and straight, allowing the object its own fidelity.  His black and white work gave the photographs textural depth and authenticity, stripped and emptied of drama or distraction.”

Zen photography, says Dr. Pearson, “calls out from us the importance, the urgency of seeing, fully aware, experiencing what is here . . . what is given by God and hidden by society.  Instead of looking for God in the spectacular sunset, the breathtaking view, in a sacred space, or in some preconceived way, we have to stop and see God in the ordinary, everyday things of our life.”

“. . . Two chairs ask: do you see the presences? The branches whistle: do you feel the wind tangled between us.  The basket affirms: I'm empty yet full....:”   Thomas Merton

Many see Merton's work as cogent and meaningful for today's world as they were for his time, very possibly more so.  Dr. Joseph J. McGowan, president of Bellarmine University, believes that is true:

“His writings on the search for truth, religious inquiry, the future of humanity, the value of cross-cultural and inter-faith awareness, and his advocacy for peace, social justice and sustainability have urgent contemporary relevance.”

On the Villanova campus, Drinking Tea: Thomas Merton's Legacy on Living, Learning and Loving, a talk by Dr. Virginia Kaib Ratigan, will take place on September 9 at 4:30 pm in the Connelly Center Cinema.  Dr. Ratigan is Professor Emerita in Religious Studies at Rosemont College, where for 25 years she taught courses in spirituality, scripture, Christian sacraments, ethics, religious education and women and religion.

More information on the upcoming schedule of campus events surrounding the Merton centennial may be found atwww.campusministry.villanova.edu.

The Art Gallery is open weekdays from 9 am into most evenings.  For extended and weekend hours, and other information, telephone the Art Gallery at (610) 519-4612.  Selected works in the Thomas Merton exhibit may be previewed on the gallery’s website atwww.artgallery.villanova.edu.