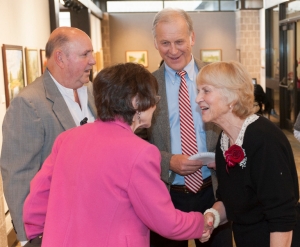 Artists Tamara and Vladimir at their reception

Villanova, PA – Gifted child art students Tamara and Vladimir Adashkevich grew up sister and younger brother amid the post-World War II rubble of the Soviet city of Minsk with dreams of becoming fine artists. With little likelihood that the destroyed city could support such aesthetic ambitions, they reluctantly chose more secure career paths. Some 60 years after they painted together, they are reunited in art at the Villanova University Art Gallery.

Their first ever joint exhibit, 'Vladimir and Tamara: Together Again', opens October 16 in the Art Gallery, located in the Connelly Center on the Villanova campus. A free public reception to meet the brother/sister artists will take place in the gallery on Friday, October 24, from 5 to 7 pm. Refreshments will be served. Convenient parking is available.

Tamara and Vladimir invite those who attend the exhibit to share a sense of the beauty they have sought and found through their art at home and around the world. They hope “people will gain pleasure from seeing some beautiful creations of Mother Nature, and human beings.”  Vladimir dedicates the exhibit to Alice Cobb and her late husband Thomas of Los Angeles. On a long ago visit to their city, the couple welcomed him into their home, came to embrace him as a son, and nurtured the spirit of a seeker and achiever.

Following their art educations, both went on to graduate from the Belarusan Polytechnic Institute. Tamara began a career in civil engineering, and built her life in Minsk. She promised herself she would return to painting when she retired.

For his career, Vladimir chose a highly technical path, earning a Master degree and employment in thermo physics and thermodynamics. He continued his art as a tonic against the stress of his work: “I never lost touch with painting,” he says, “Doing art on weekends and vacations was rest for my soul and an escape from my highly technical occupation.” A later change in career and the opportunity to travel would move his art closer to the center of his life. It would also bring him to Villanova University, first as a student and, later a staff member for the Art Gallery. In between, he would marry.

At age 55, Tamara retired and kept her vow to herself, returning to the oils and watercolors she had set aside more than 30 years earlier. With the help of leading Belarusan women painters, she refreshed her latent talents and developed new ones, steadily gaining recognition for her artistry through participation in solo and group exhibits.

In oils and watercolors, Tamara's paintings in the Villanova exhibit include still lifes and scenes of gardens, fields, forests and waterways of her country. Of his older sister and her paintings, Vladimir says, “Tamara is a devoted gardener. She spends a lot of time painting at her summer home (dacha) outside Minsk.”

The eye and hand of a remarkable painter and very serious gardener are revealed in Tamara's floral still lifes. The occasional wounded stem and hang-dog pedal lend real-to-life quality to her subject matter, while her sharp-edged handling of color and space give depth to her arrangements.

Her Belarusan landscapes come in three styles: sharp edged, soft hued, and mixed. A sense of serenity is offered in her rendering of a translucent, moss-bottomed country stream. The barely rippled reflection of a pale blue sky and riverbank trees and flowers on the unharried surface convey tranquility.

Vladimir's watercolor cityscapes are inspired by his world travels and the milieu of the scuba diver, of which he is an avid one. His sacred icons in egg tempera and fragile gold leaf testify to his faith journey, patient attention to exquisite detail, and admitted perfectionism.

Changing direction at mid-career away from his highly technical work, Vladimir earned a degree in linguistics, focused on English and French languages and literature, and became an interpreter and tour manager for the government-operated tourist company. In 1992, the job brought him to Villanova as curator for 'With Love from Minsk', a major multi-media exhibit of works by leading Belarusan artists. (Belarus became an independent nation following the dissolution in 1991 of the Soviet Union, with Minsk as its capital.)

The complicated, lengthy arrangements to bring the highly successful international exhibit to Villanova had been made by Gallery Director Fr. Richard G. Cannuli, O.S.A. (Order of St. Augustine), himself a watercolorist and Iconographer.

When the exhibit left, Vladimir remained at Villanova to study for a master's degree in business administration, with Fr. Cannuli's encouragement. Meanwhile, he found common ground in the creed of enlightenment professed by of the Roman Catholic Augustinian community, which founded and still guides the University. “The Augustinian motto perfectly fit my never ending feeling of curiosity,” he says.

His master's degree completed, he obtained his Green Card as permanent United States resident, resumed language studies, took courses by Fr. Cannuli in Iconography, and entered his own work in area art exhibits, including venues such as the Chester Springs Studio Art Center, and juried shows. He is a member of the Delaware Valley Art League.

For the Villanova Art Gallery, his artistry in designing exhibit invitations and sense of place and space in hanging shows have received high praise from visiting artists. For 'Together Again', he, as usual, did both.

The exhibit continues to December 4. The Art Gallery is open weekdays from 9 am to 5 pm, with extended hours on weekends. For that and other information, telephone the Gallery at (610) 519-4612. Selected works for the 'Vladimir/Tamara exhibit may be previewed on the Gallery's website at www.artgallery.villanova.edu